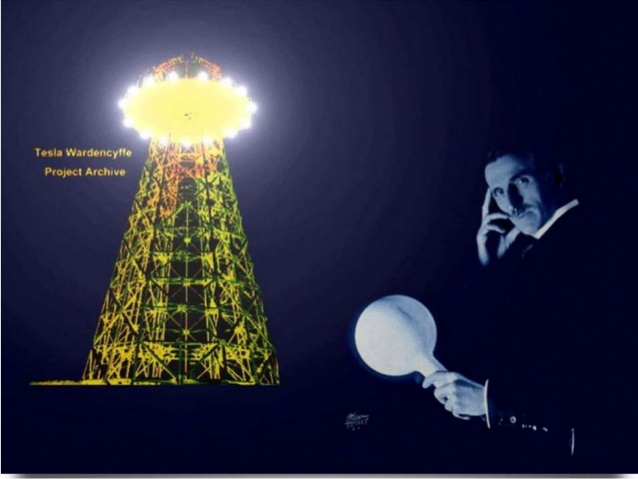 Wireless Electricity involves a charging field, which is something pioneered by Nikola Tesla, a world leader who discovered alternating current (AC) electricity. AS most geniuses experience, he had great difficulty convincing men of his time to believe in a Wireless system founded on field power magnetism. Thomas Edison was in favor of direct current (DC) electricity and opposed AC electricity strenuously. Tesla eventually sold his rights to his alternating current patents to George Westinghouse for $1,000,000.

After paying off his investors, Tesla spent his remaining funds on his other inventions and culminated his efforts in a major breakthrough in 1899 at Colorado Springs by transmitting 100 million volts of high-frequency Wireless Electricity through a coils magnetic field, over a distance of 26 miles at which he lit up a bank of 200 light bulbs and ran one electric motor in order to power wireless devices! His design was to power devices, remotely. With this souped up version of his Tesla coil, Tesla claimed that only 5% of the transmitted energy was lost in the process. But broke of funds again, he looked for investors to back his project of broadcasting electric power in almost unlimited amounts to any point on the globe.

The method he would use to produce this Wireless Electricity was to employ the earth's own resonance with its specific vibrational frequency to conduct AC electricity via a large electric oscillator. When J.P. Morgan agreed to underwrite Tesla's technologies, a strange structure was begun and almost completed near Wardenclyffe in Long Island, N.Y. Looking like a huge lattice-like, wooden oil derrick with a mushroom cap, it had a total height of 200 feet. Then suddenly, Morgan withdrew his support to the project in 1906, and eventually the structure was dynamited and brought down in 1917.

A Tesla coil is a special transformer that can take the 110 volt electricity from your house and convert it rapidly to a great deal of high-voltage, high-frequency, low-amperage power. The high-frequency Wireless Electricity output of even a small Tesla coil can light up fluorescent tubes held several feet away without any wire connections. Even a large number of spent or discarded fluorescent tubes (their burned out cathodes are irrelevant) will light up if hung near a long wire running from a Tesla coil while using less than 100 watts drawn by the coil itself when plugged into an electrical outlet!

Since the Tesla coil steps up the voltage to such a high degree, the alternating oscillations achieve sufficient excitations efficiently within the tubes of gases to produce lighting at a minimal expense of original power! Fluorescent tubes can be held under high-tension wires to produce the same lighting up effect. Remember the farmer a few years ago who was caught with an adaptive transformer under a set of high tension lines that ran over his property? Through the air, he pulled down all the power he needed to run his wireless powered farm devices power without using any connecting apparatus to the lines overhead! Any electrical engineer who lives by the laws of science and works with the proper materials can do the same thing!