What is a Multimeter? 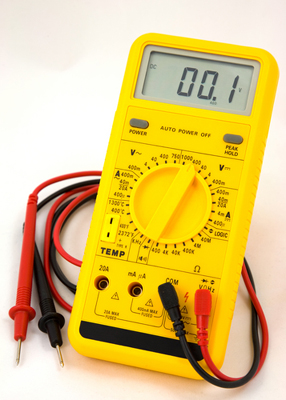 The volt-ohm-milliammeter (VOM) is the most often used multimeter

What is a Multimeter?

In the electronics lab, a common piece of test equipment is the multimeter, in which different kinds of meters are combined into a single unit. The volt-ohm-milliammeter (VOM) is the most often used. As its name implies, it combines voltage, resistance and current measuring capabilities.

You should not have too much trouble envisioning how a single milliammeter can be used for measuring voltage, current and resistance. The preceding discussions for mea­surements of these quantities have all included methods in which a current meter can be used to measure the intended quantity.

Commercially available multimeters have certain limits in the values they can mea­sure. The maximum voltage is around 1000 V; larger voltages require special leads and heavily insulated wires, as well as other safety precautions. The maximum current that a common VOM can measure is about 1 A. The maximum resistance is on the or­der of several megohms or tens of megohms. The lower limit of resistance indication is about an ohm.

It was mentioned that a good voltmeter will disturb the circuit under test as little as pos­sible, and this requires that the meter have a high internal resistance. Besides the elec­trostatic type voltmeter, there is another way to get an extremely high internal resistance. This is to sample a tiny, tiny current, far too small for any meter to directly indicate, and then amplify this current so that a meter will show it. When a miniscule amount of current is drawn from a circuit, the equivalent resistance is always extremely high.

The most effective way to accomplish the amplification, while making sure that the current drawn really is tiny, is to use either a vacuum tube or a field-effect transistor (FET). You needn't worry about how such amplifiers work right now; that subject will come much later in this book. A voltmeter that uses a vacuum tube amplifier to mini­mize the current drain is known as a vacuum-tube voltmeter (VTVM). If an FET is used, the meter is called a FET voltmeter (FETVM). Either of these devices provide an extremely high input resistance along with good sensitivity and amplification. And they allow measurement of lower voltages, in general, than electrostatic voltmeters.