Resistance slows down the rate of transfer of charge carriers (usually electrons) by "brute force." In this process, some of the energy is invariably converted from electrical form to heat. Resistance is said to consume power for this reason. Resistance is pre­sent in dc as well as in ac circuits, and works the same way for either direct or alternat­ing current.

Inductance impedes the flow of ac charge carriers by temporarily storing the en­ergy as a magnetic field. But this energy is given back later.

Capacitance impedes the flow of ac charge carriers by temporarily storing the energy as an electric field. This energy is given back later, just as it is in an inductance. Capacitance is not generally important in pure-dc cir­cuits. It can have significance in circuits where dc is pulsating, and not steady.

Capacitance, like inductance, can appear when it is not wanted or intended. As with inductance, this effect tends to become more evident as the ac frequency increases.

Capacitance in electric circuits is deliberately introduced by a device called a capacitor. It was discovered by the Prussian scientist Ewald Georg von Kleist in 1745 and independently by the Dutch physicist Pieter van Musschenbroek at about the same time, while in the process of investigating electrostatic phenomena. They discovered that electricity obtained from an electrostatic machine could be stored for a period of time and then released. The device, which came to be known as the Leyden jar, consisted of a stoppered glass vial or jar filled with water, with a nail piercing the stopper and dipping into the water. By holding the jar in the hand and touching the nail to the conductor of an electrostatic machine, they found that a shock could be obtained from the nail after disconnecting it, by touching it with the free hand.

This reaction showed that some of the electricity from the machine had been stored. A simple but fundamental step in the evolution of the capacitor was taken by the English astronomer John Bevis in 1747 when he replaced the water by metal foil forming a lining on the inside surface of the glass and another covering the outside surface.

The property of capacitance

Imagine two very large, flat sheets of metal such as copper or aluminum, that are ex­cellent electrical conductors. Suppose they are each the size of the state of Nebraska, and are placed one over the other, separated by just a foot of space. What will happen if these two sheets of metal are connected to the terminals of a battery, as shown in Fig. 11-1.

Fig. 11-1. Two plates will become charged electrically, one positively and the other nega­tively.

The two plates will become charged electrically, one positively and the other nega­tively. You might think that this would take a little while, because the sheets are so big. This is an accurate supposition.

If the plates were small, they would both become charged almost instantly, attaining a relative voltage equal to the voltage of the battery. But because the plates are gigantic, it will take awhile for the negative one to "fill up" with electrons, and it will take an equal amount of time for the other one to get electrons "sucked out." Finally, however, the volt­age between the two plates will be equal to the battery voltage, and an electric field will exist in the space between the plates. 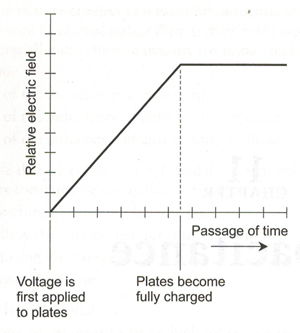 Fig. 11-2. Relative electric field intensity, as a function of time, between two metal plates connected to a voltage source.