Capacitance between two electrodes may be called for measurement purposes as "the charge stored per unit potential difference between them".

A useful device for storing electrical energy consists of two conductors in close proximity and insulated from each other, like a battery, where certain kinds of insulation material affects the battery's ability to store applied voltages. A simple example of such a storage device is the parallel plate capacitor. If positive charges with total charge +Q are deposited on one of the conductors and an equal amount of negative charge voltage -Q is deposited on the second conductor, the capacitor is said to stores charge Q. Such a device consists of two flat conducting plates, each of area A, parallel to each other and separated by a distance d. 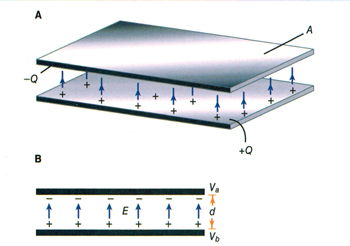 It depends on their surface area, spacing, applied votlages, and the character of the dielectric material or materials, which is affected by the electric field between them. The value of a capacitor, measured in farads or a convenient submultiple of this unit, will be influenced quite generally by temperature, pressure, or any ambient condition that changes the dimensions or spacing of the electrodes or the characteristics of the dielectric. The dielectric constant of a material is defined as the ratio of the unit of capacitance of a pair of electrodes, with the material occupying all the space affected by the field between them, to the capacitance of a capacitor of the same electrode configuration in vacuum.

in coulombs per metre squared. Equation (8) gives the electric field when the surface charge density is known as E = ak. This, in turn, relates the potential difference to the charge on the capacitor and the geometry of the plates. The result is:

The unit used for capacity is the farad (F), named in honour of the English scientist Michael Faraday; one farad equals one coulomb per volt. In terms of ordinary electric and electronic equipment, the farad is enormous, and capacitors are generally rated in microfarads (ori.e microfarad equals 10-6 farad) or picofarads (10-12 farad). In equation, only the potential difference is involved. The potential of either plate can be set arbitrarily without altering the electric field between the plates. Often one of the plates is grounded - i.e., its potential is set at the Earth potential, which is referred to as zero volts.