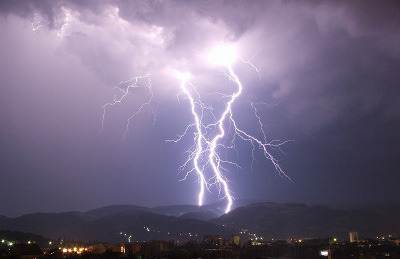 Because of scientic investigation, from each experiment electrical technology was born.

Many people think Benjamin Franklin invented electricity with his famous kite-flying experiments in 1752. Franklin is famous for tying a key to a kite string during a thunderstorm, proving that static electricity and lighting were indeed, the same thing. However, that isn’t the whole story of electricity. 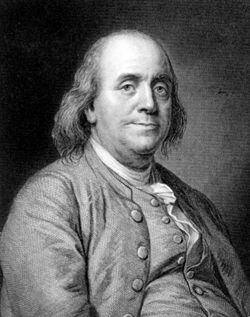 When it comes to electricity invention or the discovery of energy power, it is actually a long story, over a long time. Because of scientic investigation, from each experiment electrical technology was born. Electrical light is so common to this modern world in the form of lightning, but the question of who invented electricity should actually be what was involved in discovering electricity. Electricity was common in the natural world, but electric power was the result of experiement.

From the writings of Thales of Miletus it appears that Westerners knew as long ago as 600 B.C. that amber becomes charged by rubbing. There was little real progress until the English scientist William Gilbert in 1600 described the electrification of many substances and coined the term electricity from the Greek word for amber. As a result, Gilbert is called the father of modern electricity. In 1660 Otto von Guericke invented a crude machine for producing static electricity.

It was a ball of sulfur, rotated by a crank with one hand and rubbed with the other. Successors, such as Francis Hauksbee, made improvements that provided experimenters with a ready source of static electricity. Today's highly developed descendant of these early machines is the Van de Graaf generator, which is sometimes used as a particle accelerator. Robert Boyle realized that attraction and repulsion were mutual and that electric force was transmitted through a vacuum. Stephen Gray distinguished between conductors and nonconductors. C. F. Du Fay recognized two kinds of electricity, which Benjamin Franklin and Ebenezer Kinnersley of Philadelphia later named positive and negative.

Progress quickened after the Leyden jar was invented in 1745 by Pieter van Musschenbroek. The Leyden jar stored static electricity, which could be discharged all at once. In 1747 William Watson discharged a Leyden jar through a circuit, and comprehension of the current and circuit started a new field of experimentation. Henry Cavendish, by measuring the conductivity of materials (he compared the simultaneous shocks he received by discharging Leyden jars through the materials), and Charles A. Coulomb, by expressing mathematically the attraction of electrified bodies, began the quantitative study of electricity.

A new interest in electric current began with the invention of the battery. Luigi Galvani had noticed (1786) that a discharge of static electricity made a frog's leg jerk. Consequent experimentation produced what was a simple electron cell using the fluids of the leg as an electrolyte and the muscle as a circuit and indicator. Galvani thought the leg supplied electricity, but Alessandro Volta thought otherwise, and he built the voltaic pile, an early type of battery, as proof. Continuous current from batteries smoothed the way for the discovery of G. S. Ohm's law, relating current, voltage (electromotive force), and resistance, and of J. P. Joule's law of electrical heating. Ohm's law and the rules discovered later by G. R. Kirchhoff regarding the sum of the currents and the sum of the voltages in a circuit are the basic means of making circuit calculations.

A Different Kind of Power: The Battery

Learning how to produce and use electricity was not easy. For a long time, there was no dependable source of electricity for experiments. Finally, in 1800, Alessandro Volta, an Italian scientist, made a great discovery. He soaked paper in salt water, placed zinc and copper on opposite sides of the paper, and watched the chemical reaction produce an electric current. Volta had created the first electric cell.

By connecting many of these cells together, Volta was able to “string a current” and create a battery. It is in honor of Volta that we rate batteries in volts. Finally, a safe and dependable source of electricity was available, making it easy for scientists to study electricity. 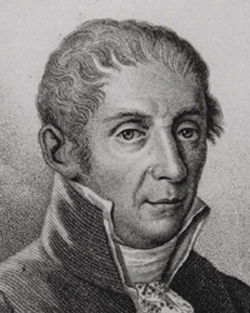 An English scientist, Michael Faraday, was the first one to realize that an electric current could be produced by passing a magnet through a copper wire. It was an amazing discovery. Almost all the electricity we use today is made with magnets and coils of copper wire in giant power plants. Both the electric generator and electric motor are based on this principle. A generator converts motion energy into electricity. A motor converts electrical energy into motion energy.

In 1819 Hans Christian Oersted discovered that a magnetic field surrounds a current-carrying wire. Within two years André Marie Ampère had put several electromagnetic laws into mathematical form, D. F. Arago had invented the electromagnet, and Michael Faraday had devised a crude form of electric motor. Practical application of a motor had to wait 10 years, however, until Faraday (and earlier, independently, Joseph Henry) invented the electric generator with which to power the motor. A year after Faraday's laboratory approximation of the generator, Hippolyte Pixii constructed a hand-driven model. From then on engineers took over from the scientists, and a slow development followed; the first power stations were built 50 years later. 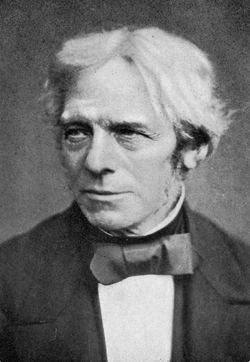 In 1873 James Clerk Maxwell had started a different path of development with equations that described the electromagnetic field, and he predicted the existence of electromagnetic waves traveling with the speed of light. Heinrich R. Hertz confirmed this prediction experimentally, and Marconi first made use of these waves in developing radio (1895). John Ambrose Fleming invented (1904) the diode rectifier vacuum tube as a detector for the Marconi radio. Three years later Lee De Forest made the diode into an amplifier by adding a third electrode, and electronics had begun. Theoretical understanding became more complete in 1897 with the discovery of the electron by J. J. Thomson. In 1910–11 Ernest R. Rutherford and his assistants learned the distribution of charge within the atom. Robert Millikan measured the charge on a single electron by 1913.

Mr. Edison and His Light

Thomas Alva Edison is one of the greatest of all inventors and is normally credited with creating light bulbs (along with Nicolas Tesla). He arrived in Boston in 1868. In Boston he found men who knew something of electric current, and, as he working at night and cut short his sleeping hours, he found time for study. He bought and studied Faraday's works. Presently came the first of his multitudinous inventions, an automatic vote recorder, for which he received a patent in 1868. This necessitated a trip to Washington, which he made on borrowed money, but he was unable to arouse any interest in the device. "After the vote recorder," he says, "I invented a stock ticker, and started a ticker service in Boston; had thirty or forty subscribers and operated from a room over the Gold Exchange." This machine Edison attempted to sell in New York, but he returned to Boston without having succeeded. He then invented a duplex telegraph by which two messages might be sent simultaneously, but at a test, the machine failed because of the stupidity of the assistant. 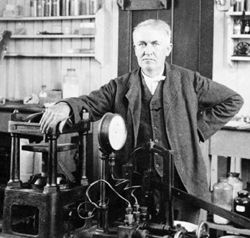 Penniless and in debt, Thomas Edison arrived again in New York in 1869. But now fortune favored him. The Gold Indicator Company was a concern furnishing to its subscribers by telegraph the Stock Exchange prices of gold. The company's instrument was out of order. By a lucky chance, Edison was on the spot to repair it, which he did successfully, and this led to his appointment as superintendent at a salary of three hundred dollars a month. When a change in the ownership of the company threw him out of the position he formed, with Franklin L. Pope, the partnership of Pope, Edison current, and Company, the first firm of electrical engineers in the United States.

Thomas Edison immediately set up a shop in Newark. He improved the system of automatic telegraphy (telegraph machine) that was in use at that time and introduced it into England. He experimented with submarine cables and worked out a system of quadruplex telegraphy by which one wire was made to do the work of four. These two inventions were bought by Jay Gould, owner of the Atlantic and Pacific Telegraph Company. Gould paid 30,000 dollars for the quadruplex system but refused to pay for the automatic telegraph. Gould had bought the Western Union, his only competition. "He then," wrote Edison, "repudiated his contract with the automatic telegraph people and they never received a cent for their wires or patents, and I lost three years of very hard labor. But I never had any grudge against him because he was so able in his line, and as long as my part was successful the money with me was a secondary consideration. When Gould got the Western Union I knew no further progress in telegraphy was possible, and I went into other lines."

In 1879, Thomas Edison focused on inventing a practical light bulb, one that would last a long time before burning out. The problem was finding a strong material for the filament, the small wire inside the bulb that conducts electricity. Finally, Edison used ordinary cotton thread that had been soaked in carbon. This filament didn’t burn at all— it became incandescent; that is, it glowed.

The next challenge was developing an electrical system that could provide people with a practical source of energy to power these new lights. Edison wanted a way to make electricity both practical and inexpensive. He designed and built the first electric power plant that was able to produce electricity and carry it to people’s homes.

The Question: AC or DC?

The turning point of the electric age came a few years later with the development of AC (alternating current) power systems. Croatian scientist, Nikola Tesla came to the United States to work with Thomas Edison. After a falling out, Tesla discovered the rotating magnetic field and created the alternating current electrical system that is used very widely today. Tesla teamed up with engineer and business man George Westinghouse to patent the AC system and provide the nation with power that could travel long distances – a direct competition with Thomas Edison’s DC system. Tesla later went on to form the Tesla Electric Company, invent the Tesla Coil, which is still used in science labs and in radio technology today, and design the system used to generate electricity at Niagara Falls. 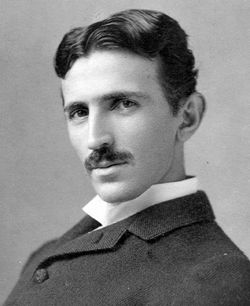 Electricity didn’t have an easy beginning. While many people were thrilled with all the new inventions, some people were afraid of electricity and wary of bringing it into their homes. They were afraid to let their children near this strange new power source. Many social critics of the day saw electricity as an end to a simpler, less hectic way of life. Poets commented that electric lights were less romantic than gaslights. Perhaps they were right, but the new electric age could not be dimmed.

In 1920, about two percent of U.S. energy was used to make electricity. In 2017, with the increasing use of technologies powered by electricity, it was almost 40 per cent.