What is Arc Flash 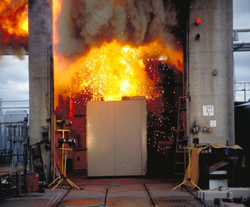 What is Arc Flash?

Simply explained, an arc flash occurs when an electric current (usually in the form of an explosive pressure wave) suddenly leaves the equipment and travels through the air, either from one live conductor to another, or from a piece of energized electrical equipment to ground. Potential arc flash hazards include flashover and blast.

The results of such a flashover are in most cases violent and when an electrical worker is in close proximity to the electrical equipment that is involved in a flashover and arc blast, that worker can receive a serious injury and sometimes, even death can occur.

AF is usually caused by a number of factors, including:

The following three factors dictate the severity of an injury:

Explosions are costly. It is because of the extreme nature of an explosion that electrical workers are injured. And when they are injured, the results can be devastating, even resulting in death. Many injured electrical workers discover that their quality of future life is impaired and they can never regain their past quality of life. Extensive medical care is often needed, sometimes resulting in medical bills exceeding $1,000,000. The best way to avoid arc flash accidents is to de energize the equipment.

The National Fire Protection Association (NFPA) has developed a standard (NFPA70E) which outlines specific approach boundaries that are designed to protect electrical workers near energized electrical equipment such as a circuit breaker.

Here are the Flash Protection Boundaries:

The Flash Protection Boundary is the farthest established boundary from the energized electrical equipment which contains a hazardous level of incident energy. If an AF occurs within this boundary, a worker would be exposed to a curable second degree burn (1.2 calories/cm2 ). The real issue within this boundary is the heat that is generated from the flashover, which results in a burn.

The Limited Approach Boundary is defined as an approach limit at a distance from an exposed live part where a shock hazard exists.

The Restricted Approach Boundary is defined as approach limit at a distance from an exposed live part which there is an increased risk of shock.

Ways to Protect the Workers