Off‑grid systems are designed for individuals and businesses that want to or must supply all of their needs via solar energy ‑ or a combination of solar and wind or some other renewable source. As shown in Figure 1a, off‑grid systems bear a remarkable resem­blance to grid‑connected systems with battery backup. There are some noteworthy differences, however. The most notable is the lack of grid connection.

Off‑grid systems often require a little "assistance' to make up for shortfalls. Additional electricity can be supplied by a wind tur­bine, micro hydro turbine, or a gasoline or diesel generator, often referred to as a gen‑set. "A gen‑set also provides redundancy' notes National Renewable Energy Laboratory's wind energy expert Jim Green. Moreover, "if a critical component of a hybrid system goes down temporarily, the gen‑set can fill in while repairs are made:' Gen‑sets also play a key role in maintaining batteries. 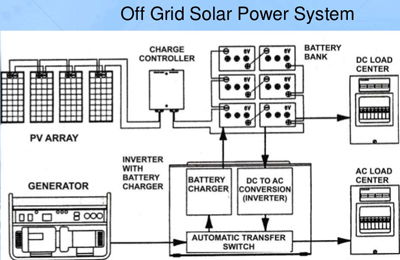 Off‑grid systems with gen‑sets require another component, a battery charger. They convert the AC electricity produced by the generator into DC electricity that's then fed into the battery bank. Battery chargers are built into the inverter and operate automati­cally. When a generator is started and the inverter senses voltage at its input terminals, it then transfers the home loads over to the gen­erator through an internal, automatic transfer switch. It also begins charging the battery from the generator.

As is evident by comparing schematics of the three types of sys­tems, off‑grid PV systems are the most complex. Moreover, some systems are partially wired for DC ‑ that is, they contain DC cir­cuits. These are supplied directly from the battery bank. DC circuits are used to service lights or DC appliances such as refrig­erators or DC well or cistern pumps. Why include DC circuits ?

Many people who install them do so because DC circuits bypass the inverter. Because inverters are not 100% efficient in their conversion of DC to AC, this saves energy. Operating a DC refrig­erator, for example, over long periods can save a substantial amount of energy.

The problem with this strategy is that DC circuits are low volt­age circuits and thus require much larger wiring and special, more expensive plugs and sockets. DC appliances are also harder to find. In addition, they are typically much smaller than those used in homes, and they are less reliable.

If you are thinking about installing an off‑grid system in a home or business, your best bet is an AC system ‑ unless your home is extremely small and your needs are few.

To simplify installation of battery‑based systems, many installers recommend use of a power center, such as the one shown in Figure 2. Power centers contain many of the essential components of a renewable energy system, including the inverter, the charge con­troller, and fused safety disconnects ‑ all prewired. This makes an electrician's job easier. Power centers also provide busses (con­nection points) to which the wires leading to the battery bank, the inverter, and the PV array connect.

Pros and Cons of Off‑Grid Systems

Off‑grid systems offer many benefits, including total emancipation from the electric utility (Table 1). They provide a high degree of energy independence that many people long for. You become your own utility, responsible for all of your energy production. In addi­tion, if designed and operated correctly, your system will provide energy day in and day out for many years. Off‑grid systems also provide freedom from occasional power failures. 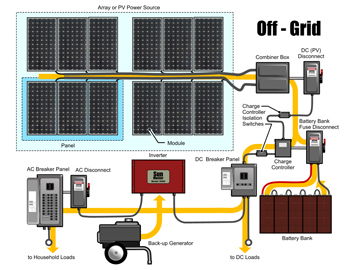 Off‑grid systems do have some downsides. One of the most significant is that they are the most expensive of the three renewable energy system options. Battery banks, sup­plemental wind systems, and generators add substantially to the cost ‑ often 60% more. They also require more wiring. In addition, you will need space to house battery banks and generators. Although cost is usually a major downside, there are times when off‑grid sys­tems cost the same or less than grid‑connected systems ‑ for example, if a home or business is located more than a few tenths of a mile from the electric grid. Under such circumstances, it can cost more to run electric lines to a home than to install an off‑grid system.

When installing an off‑grid system, remember that you become the local power company and your independence comes at a cost to you. Also, although you may be independent" from the utility, you will need to buy a gen‑set and fuel, both from large corporations. Gen‑sets cost money to maintain and operate. You will be dependent on your own ability to repair your power system when something fails.

An off‑grid system also comes at a cost to the environment. Gen‑sets produce air and noise pollution. Lead‑acid batteries are far from environmentally benign. Although virtually all lead‑acid batteries are recycled, battery production is responsible for considerable envi­ronmental degradation. Mining and refining the lead are fairly damaging. Thanks to NAFTA and the global economy, lead pro­duction and battery recycling are being carried out in many poor countries that have lax or nonexistent environmental policies. They are responsible for some of the most egregious pollution and health problems facing poorer nations across the globe, according to small wind energy expert Mick Sagrillo. So, think carefully before you decide to install an off‑grid system.