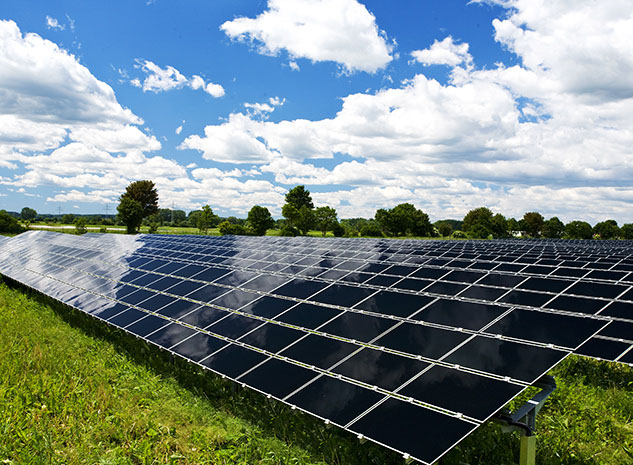 Not using fossil fuels is the greatest advantage of solar power

Although solar electricity, like any fuel, has some downsides, they're clearly not insurmountable and, many believe, they are outweighed by their advantages. One of the most important advantages is that solar energy is an abundant, renewable resource. While natural gas, Oil, coal, and nuclear fuels are finite and on the decline, solar energy will be available to us as long as the Sun continues to shine ‑ for at least 5 billion years.

Solar energy is a clean energy resource, too. By reducing our reliance on coal‑fired power plants, solar electricity could help homeowners and businesses reduce their contribution to a host of environmental problems, among them acid rain, global climate change, habitat destruction, and species extinction. Solar electric­ity could even replace costly, environmentally risky nuclear power plants. Nuclear power plants cost upwards of $6 to $ billion, and no long term solution has been enacted to store the high‑level radioac­tive waste they produce.

Solar energy could help us decrease our reliance on declining and costly supplies of fossil fuels like natural gas. Solar could also help us decrease our reliance on oil. Although very little electricity in the United States comes from oil, electricity generated by solar electric systems could be used to power electric or plug‑in hybrid cars and trucks, reducing our demand for gasoline and diesel fuel, both of which come from oil. And, although the production of solar electric systems does have its impacts, all in all it is a relatively benign technology compared to fossil fuel and nuclear power plants.

Another benefit of solar electricity is that, unlike oil, coal, and nuclear energy, the fuel is free. Moreover, solar energy is not owned or controlled by hostile foreign states or one of the dozen or so influential energy companies that largely dictate energy policy, espe­cially in the United States. Because the fuel is free and will remain so, solar energy can provide a hedge against inflation, caused in part by ever‑increasing fuel costs.

An increasing reliance on solar and wind energy could also ease political tensions worldwide. Solar and other renewable energy resources could alleviate the need for costly military operations aimed at stabilizing the Mideast, a region where the largest oil reserves reside. Because the Sun is not owned or controlled by the Middle East, we'll never fight a war over solar or other renewable energy resources. Not a drop of human blood will be shed to ensure a steady supply of solar energy to fuel our economy.

Yet another advantage of solar‑generated electricity is that it uses existing infrastructure ‑ the electrical grid ‑ and technolo­gies in use today such as electric toasters, microwaves, and the like. A transition to solar electricity could occur fairly seamlessly.

Solar electricity is also modular. You can add on to a system over time. If you can only afford a small system, you can start small and expand your system as money becomes available.

Solar electricity could provide substantial economic benefits for local, state, and regional economies. And solar electricity does not require extensive use of water, an increasing problem for coal, nuclear, and gas‑fired power plants, particularly in the western United States and in and regions.