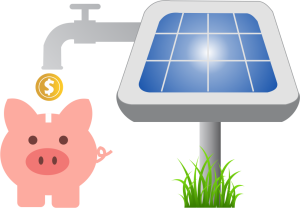 At least three options are available to analyze the economic costs and benefits of a solar electric system: (1) a comparison of the cost of electricity from the solar electric system with conventional power or some other renewable energy technology, (2) an estimate of return on investment, and (3) a more sophisticated economic analy­sis tool known as total cost of ownership.

Suppose you live in Colorado and are interested in installing a grid‑connected solar electric system that will meet 100% of your electric needs. Your super‑efficient home requires, on average, 500 kWh of electricity per month. That's 16.4 kWh per day. Peak sun hours is 6. To size the system, divide the electrical demand (16.4 kWh per day) by the peak sun hours. The result is a 2.7 kW sys­tem. Adjusting for 78% efficiency, the system should be 3.46 or 3.5 kW. For the sake of simplicity, let's assume that the system is not shaded at all during the year.

According to your calculations or the calculations provided by the solar installer, this system will produce about 16.4 kWh of elec­tricity per day or 6,000 kWh per year. If the system lasts for 30 years, it will produce 180,000 kWh.

To calculate the cost per kilowatt‑hour, divide the system cost ($8,575) by the output (180,000 kWh). In this case, your electric­ity will cost slightly less than 4.76 cents per kWh. Considering that the going rate in Colorado is currently about 9.5 cents per kWh, including all fees and taxes, the PV system represents a pretty good investment.

Simple ROT is calculated by dividing the annual dollar value of the energy generated by a PV or wind system by the cost of the sys­tem. A solar electric system that produces 6,000 kWh of electricity per year in an area where electricity sells at 9.5 cents per kilowatt‑hour generates $570 worth of electricity each year. If the system costs $8,575, after rebates, the simple return on investment is $570 divided by $10,710 x 100 which equals 6.6%. If the utility charges 15 cents per kWh, the 6,000 kWh of electricity would be worth $900 and the simple ROT would be 10.5%. Given the state of the economy, both of these represent decent rates of return. (If only our retirement funds performed half as well these days!) Even in good economic times, these are respectable ROTs.

Comparing the cost of electricity and return on investment are both simple tools. Both fail to take into account a number of economic factors. For example, both techniques fail to account for interest payments on loans that may be required to purchase a PV system. Interest payments will add to the cost of electricity produced by the system. For those who self‑finance, for example, by taking money out of savings, both tools fail to take into account opportunity costs ‑ lost income from interest‑bearing accounts raided to pay for the system.

Both methods fail to take into account the rising cost of elec­tricity. Nationwide, electric rates have increased on average about 4.4% per year over the past 35 years. In recent years, the rate of increase has been double that amount in some areas.

Although these analytic tools fail to account for key economic factors that would decrease the value of a PV system, the rising cost of electricity from conventional sources will in all likelihood offset the opportunity cost or the cost of financing a system.

That said, these techniques do not take into account system maintenance, insurance, or property taxes, if any. All of these factors add to the cost of a system over the long term.

Despite these shortcomings, the cost comparison and simple return on investment are convenient tools for evaluating the economic performance of renewable energy systems. They're infinitely better than the old standby, payback (also known as "simple payback").

Payback is calculated by dividing the cost of a system by the anticipated annual savings. If the $8,575 PV system I've been look­ing at produces 6,000 kilowatt‑hours per year and grid power costs you 9.5 cents per kWh, the annual savings of $570 yields a payback of 18.8 years ($8,575 divided by $570 = 15 years). In other words, this system will take 15 years to pay for itself. From that point on, the system produces electricity free of charge.

While simple payback is fairly easy to understand, it has some very serious drawbacks. The most important is that payback is a foreign concept to most of us and, as a result, can be a bit misleading.

Besides being misleading, simple payback is a concept we rarely apply in our lives. Do avid anglers ever calculate the payback on their new bass boats ($25,000 plus the cost of oil, gas, and trans­portation to and from favorite fishing spots divided by the total number of pounds of edible bass meat at $5 per pound over the lifetime of the boat.) Do couples ever calculate the payback on their new SUV or the new chandelier they installed in the dining room ?

When calculating the cost of electricity from a solar electric sys­tem, be sure to remember to subtract financial incentives from state and local government or local utilities ‑ as in the previous exam­ple. Financial incentives can be quite substantial. In Wisconsin, for example, more than 30 utilities participate in a statewide program called Focus on Energy through which they provide customers who install PV systems a rebate of up to 25% of their system cost with a maximum reward of $35,000. Other utilities and even several states, like New York, offer generous incentives as well. The best PV incentives are found in Colorado, New Jersey, Massachusetts, California, and Oregon.

The federal government also offers a generous financial incen­tive to those who install PV systems. Their incentive is a 30% tax credit to homeowners and businesses. However, the feds also allow businesses to depreciate a solar electric system on an accelerated schedule, which means they can deduct the costs faster than other business equipment, recouping their investment more quickly. This further reduces the cost of a PV system. The US Department of Agriculture offers a 25% grant to cover the cost of PV systems on farms and rural businesses. Their minimum grant is $2,500 (for a $10,000 system) and the maximum is $500,000. To learn more about state and federal incentives in your area, log on to the Database of State Incentives for Renewables and Efficiency at www.dsireusa.org. Click on the map of your state. To learn more about USDA grant program, log on to www.rurdev.usda.gov/.

Because financial incentives can reduce the cost of a PV system, most PV system installations are driven by incentives.

For those who want a more sophisticated tool to determine whether an investment in solar energy makes sense, economists offer up dis­counting and net present value. This method, referred to as total cost of ownership, allows you to compare the cost of a PV system to the cost of the electricity it will displace. Unlike the previous economic tools, this one takes into account numerous economic parameters, including initial costs, financial incentives, maintenance costs, the rising cost of grid power, and another key element, the time value of money. The time value of money takes into account the fact that a dollar today is worth more than a dollar tomorrow and even more than a dollar a few years from now. Economists refer to this as the discount factor.

To make life easier, this economic analysis can be performed by using a spread sheet. This method is discussed in Powerfrom the Sun.

Not everyone has access to the money required to purchase a PV system ‑ even with incentives ‑ or wants to incur that kind of debt. If you are one of these people, there are some alternative financing mechanisms that could still make your dreams of a PV system come true: power purchase agreements (PPAs) and leases.

In a power purchase agreement, a private company installs a solar electric system on a customer's home mostly at their expense. (They do require a down payment to help offset the cost of the sys­tem and installation.) The company owns and"operates" the system, selling the electricity generated by the system to the homeowner at a low rate ‑ usually a rate that increases much more slowly than utility rates for the duration of the lease, typically around 18 years. Homeowners benefit because they incur no upfront costs while enjoying lower electric bills and living a more environmentally friendly lifestyle. They also own a residence that will probably sell more quickly when the time comes to put it on the market.

Another option is a lease. Once again, the PV system is installed by a private company and the system is leased to them. Customers that lease PV systems typically end up paying slightly less for elec­tricity. The lease also guarantees a fixed rate for the term of the agreement, providing a hedge against rising electric rates.

Lease programs are available in California, Arizona, Oregon, Colorado and Connecticut. Expect to see other companies enter the market in other states.

Lease programs and power purchase agreements are really quite similar. The main difference is that in lease programs there's typi­cally no down payment. However, as author and market analyst Charles W. Thurston explains in an article in Home Power maga­zine (issue 128), "if you can afford to invest up front in part of the system cost (through a PPA), you'll pay less as time goes on, and your savings can be greater at the end of the contract. In that case, a PPA may be more beneficial.'

Despite Thurston's analysis, representatives from both indus­tries argue that the financial costs are not that different over the long haul. "The bottom line is that a solar lease or PPA makes it possible for any homeowner to stop talking about tomorrow and act now," says Thurston. If you'd like to power your home with solar electricity, but can't afford a system or don't want to borrow the money, consider a lease or a power purchase agreement.

Putting It All Together

Here, you've seen that there are several ways to save money on a PV system. Efficiency measures lower the initial size and cost of a system, saving huge sums of money. Tax incentives and rebates also lower the cost. Some states exempt PV systems from sales taxes or property taxes, creating additional savings. I encourage those who are building superefficient passive solar/solar electric homes to view savings they'll accrue from efficiency measures and passive solar design as a kind of internal subsidy or rebate for their PV systems. My own solar electric system cost about $17,000 and has generated about $4,000 worth of electricity in the first 12 years. The return on investment is pretty low. However, my passive solar home has saved me approximately $18,000 in heating bills during this same period. Savings on electricity from the PV and savings on heating bills resulting from passive solar heating have more than paid for my PV system.

Economics is where the rubber meets the road. Comparing solar electric systems against the "competition" and calculating the return on investment gives a potential buyer a much more realistic view of the feasibility of solar energy at a particular site. Remember, however, economics is not the only metric on which we base our decisions. Energy independence, environmental values, reliability, the cool factor, bragging rights, the fun value, and other factors all play prominently in our decisions to invest in renewable energy.