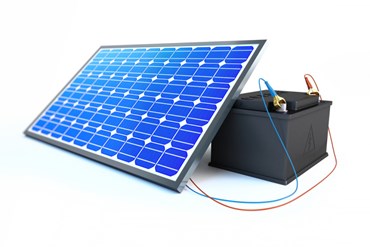 Batteries used in most off‑grid renewable energy systems are deep‑cycle flooded lead‑acid batteries. These batteries can be charged and discharged (cycled) hundreds of times before they wear out.

Lead‑acid batteries contain three separate 2‑volt compartments, known as cells. Inside each cell is a series of thick parallel lead plates (Figure1). The cells are connected internally (wired in series) so that they produce 6‑volt electricity. The space between the plates is filled with sulfuric acid (hence the term "flooded"). A partition wall separates each cell, so that fluid cannot flow from one cell to the next. The cells are encased in a heavy‑duty plastic case. 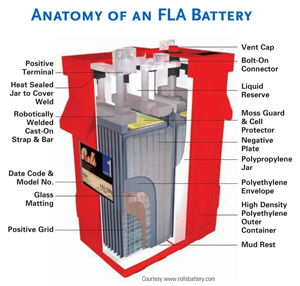 Like all other types of batteries, lead‑acid batteries convert electri­cal energy into chemical energy when they are charged. When discharging, that is, giving off electricity, chemical energy is con­verted back into electricity. The chemical reactions that take place during battery discharge are shown in Figure 2.

As illustrated, when electricity is drawn from a lead‑acid battery, sulfuric acid reacts with the lead of the negative plates (top reac­tion). This reaction yields electrons, tiny negatively charged particles. They flow out of the battery creating an electrical cur­rent. During this reaction, lead on the surface of the negative plates is converted to tiny lead sulfate crystals.

Although the chemistry of lead‑acid batteries is a bit compli­cated, it is important to remember that this system works because electrons can be stored in the chemicals within the battery when a battery is charged. The stored electrons can be drawn out by revers­ing the chemical reactions. Through this reversible chemical reaction, the battery is acting as a"charge pump:' moving electrical charges through a circuit on demand.