What is a Photovoltaic Cell ?

Photovoltaic cells are solid‑state electronic devices like transistors, diodes, and other components of modern electronic equipment. These devices are referred to as solid‑state because electrons flow through solid material within them. Most solar cells in use today are made from one of the most abundant materials on the planet, silicon, which is extracted from quartz and sand.

Because numerous solar cells are wired in series in a PV module, numerous electrons can be gathered up and conducted away from the array to power household loads. 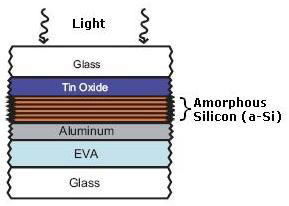 Fig1. Cross Section through a Solar Cell. Solar cells like the one shown here consist of two layers of photosensitive silicon, a thin top layer; the n‑layer; and a thicker bottom layer; the p‑layer. Sunlight causes electrons to flow from the cell through metallic contacts on the surface of most solar cells, creating DC electric­ity. Solar‑energized electrons then flow to loads where the solar energy they carry is used to power the loads. De‑energized electrons then flow back to the solar cell.

When sunlight strikes the silicon atoms in solar cells, it jars electrons out of the atoms in both layers. These electrons flow preferentially toward the surface (for reasons beyond the scope of this book). These electrons flow into the metal contacts located on the front of solar cells. Numerous solar cells are wired in series in a solar module. Because of this, electrons extracted from one cell flow to the next cell, and then to the next cell, etc., until they reach the negative terminal of the module. Electrons flow from the array through wires connected to the house to power a load (any device that consumes electricity). After deliv­ering the energy they gained from sunlight to the load, the de‑energized electrons return through a different wire to the array. The electrons then flow back into the solar cells, filling the empty spots left in the atoms created by their ejection. This permits the flow of electrons to continue ad infinitum.