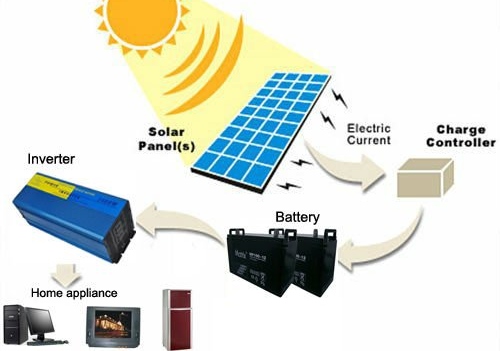 Today, the vast majority of renewable energy systems ‑ both solar and wind electric ‑ are grid‑connected. These systems require inverters that operate in sync with the utility grid. They produce electricity that is identical to that available on the grid. This type of electricity is known as grid‑compatible sine wave AC electricity.

Grid‑connected solar power inverters are also known as utility‑tie inverters. They convert DC electricity from the array in a PV system into AC electricity. Electricity then flows from the inverter to the breaker box and is then fed into active circuits, powering refrigerators, computers, and the like. Surplus electricity is then back‑fed onto the grid, running the electrical meter backward.

Grid‑compatible inverters are equipped with anti‑islanding pro­tection ‑ a feature that automatically disconnects the inverter from the grid in case of loss of grid power. That is, grid‑connected invert­ers are programmed to shut down if the grid goes down. The inverter stays off until ‑service is restored. This feature protects util­ity workers from electrical shock.

Grid‑compatible inverters also shut down if there's an increase or decrease in either the frequency or voltage of grid power outside the inverter's acceptable limits (established by the utility compa­nies). If either varies from the inverter's pre‑programmed settings, the inverter turns off.

The inverter shuts down entirely in the case of blackouts, because it requires grid connection to determine the frequency and voltage of the AC electricity it produces. Without the connection, the inverter can't operate.

Grid‑connected inverters also come with a fault condition reset ‑ a sensor and a switch that turns the inverter on when the grid is back up or the inverter senses the proper voltage and/or frequency.

To avoid losing power when the grid goes down, a homeowner can install a grid‑connected system with battery backup. Although inverters in such systems disconnect from the utility during out­ages, they can draw electricity from the battery bank to supply active circuits. As noted in the previous chapters, such systems are typically designed and wired to provide electricity only to essential circuits in a home or business, supplying the most important (crit­ical) loads.

Some inverters, like the Trace SW utility‑intertie series invert­ers, come with automatic morning wake‑up and evening shutdown. These features shut the inverter down at night (as it is no longer needed) and wake it up in the morning (to get ready to start con­verting DC electricity from the array into AC electricity.) This sleep mode in the SW series inverters uses less than 1 watt of power.

Grid‑connected inverters operate with a fairly wide input range. The DC operating range of the SW series, for instance, ranges from 34 to 75 volts DC (you might see this listed as "VDC"). Inverters from Fronius and Oregon‑based PV Powered Design are designed to operate within a broader DC voltage input range: from 150 to 500 volts DC. This permits the use of a wider range of modules and system configurations. Moreover, high‑volt­age arrays can be placed farther from the inverter than low‑voltage arrays. In addition, high‑voltage DC input means that smaller and less expensive wires can be used to transmit electricity to a home or office from the array. With the cost of copper skyrocketing as a result of higher energy prices and higher demand, savings on wire size can be substantial.

Like grid‑connected inverters, off‑grid inverters convert DC elec­tricity into AC and boost the voltage to 120 or 240 volts. Off‑grid inverters also perform a number of other essential functions, dis­cussed here. If you're installing an off‑grid system, be sure to read this section carefully.

Battery‑based inverters used in off‑grid and grid‑connected sys­tems with battery backup typically contain battery chargers. Battery chargers charge batteries from an external source ‑ usually a gen­set in an off‑grid system. But isn't the battery charged by the PV array through the charge controller ?

In off‑grid systems, battery charging gen‑sets are used to restore battery charge after periods of deep discharge. This prolongs battery life and prevents irreparable damage to the plates. Battery chargers are also used during equalization.

High‑quality battery‑based inverters also contain programma­ble high‑ and low‑voltage disconnects. These protect various components of the system, such as the batteries, appliances, and electronics in a home or business. They also protect the inverters.

Batteries can be recharged by a supplementary wind turbine or by a gen‑set. Gen‑sets may be manually started, although some inverters contain a sensor and switch that activates the generator automatically when low battery voltage is detected. The fossil fuel generator then recharges the batteries using the inverter's battery charger.

Multifunction inverters contain features of grid‑connected and off‑grid inverters. Like a grid‑connected inverter, they contain anti­islanding protection that automatically disconnects the inverter from the grid in case of loss of grid power, over/under voltage, or over/under frequency. They also contain a fault condition reset to power up an inverter when a problem with the utility grid is cor­rected. Like off‑grid inverters, multifunction inverters contain battery chargers and high‑ and low‑voltage disconnects.

If you are installing an off‑grid system, you may want to con­sider installing a multifunction inverter in case you decide to connect to the grid in the future. However, even though multi­function inverters allow system flexibility, they are not always the most efficient inverters. That's because some portion of the elec­tricity generated in such a system must be used to keep the batteries topped off. This may only require a few percent, but over time a few percent add up. In systems with poorly designed inverters or large backup battery banks, the electricity required to maintain the batteries can be quite substantial. It is also worth noting that as batteries age, they become less efficient; more power is consumed just to maintain the float charge, that is, a constant "resting" voltage. This reduces the efficiency of the entire PV system.

For best results, I recommend inverters that prioritize the deliv­ery of surplus electricity to the grid while preventing deep discharge of the battery bank, such as OutBack's multifunction inverters and Xantrex's XW series inverters.

If you want the security of battery backup in a grid‑connected system, I suggest that you isolate and power only critical loads from the battery bank. This minimizes the size of your battery bank, reduces system losses, and reduces costs. Unless you suffer frequent or sustained utility outages, a batteryless grid‑connected system usually makes more sense from both an economic and environ­mental perspective.