Types of Capacitors
Capacitors come in all shapes and sizes and are usually marked with their value in farads. They may also be divided into two groups: fixed and variable. The fixed capacitors, which have approximately constant capacitance, may then be further divided according to the type of dielectric used. Some varieties are: paper, oil, mica, electrolytic and ceramic capacitors. Figure 1 shows the schematic symbols for a fixed and variable capacitor. 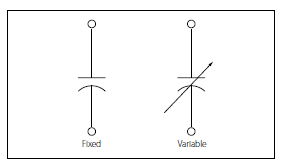 Fig. 1 - Schematic symbols for a fixed and variable capacitor.

Fixed Capacitors
Mica Capacitors The fixed mica capacitor is made of metal foil plates that are separated by sheets of mica, which form the dielectric. The whole assembly is covered in molded plastic, which keeps out moisture. Mica is an excellent dielectric and will withstand higher voltages than paper without allowing arcing between the plates. Common values of mica capacitors range from approximately 50 micromicrofarads, to about 0.02 microfarads.

Ceramic
The ceramic capacitor is constructed with materials, such as titanium acid barium for a dielectric. Internally these capacitors are not constructed as a coil, so they are well suited for use in high frequency applications. They are shaped like a disk, available in very small capacitance values and very small sizes. This type is fairly small, inexpensive, and reliable. Both the ceramic and the electrolytic are the most widely available and used capacitor.

The electrolyte in contact with the negative terminal, either in paste or liquid form, comprises the negative electrode. The dielectric is an exceedingly thin film of oxide deposited on the positive electrode of the capacitor. The positive electrode, which is an aluminum sheet, is folded to achieve maximum area. The capacitor is subjected to a forming process during manufacture, in which current is passed through it. The flow of current results in the deposit of the thin coating of oxide on the aluminum plate.

The close spacing of the negative and positive electrodes gives rise to the comparatively high capacitance value, but allows greater possibility of voltage breakdown and leakage of electrons from one electrode to the other. 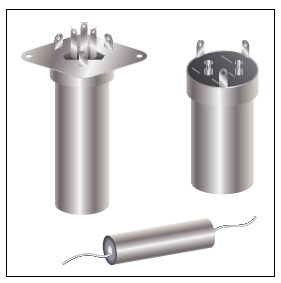 Polyester Film
In this capacitor, a thin polyester film is used as a dielectric. These components are inexpensive, tem- perature stable, and widely used. Tolerance is approximately 5–10 percent. It can be quite large depending on capacity or rated voltage.

In radio and radar transmitters, voltages high enough to cause arcing, or breakdown, of paper dielectrics are often used. Consequently, in these applications capacitors that use oil or oil impregnated paper for the dielectric material are preferred. Capacitors of this type are considerably more expensive than ordinary paper capacitors, and their use is generally restricted to radio and radar transmitting equipment. [Figure 3] 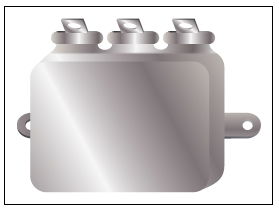 Variable Capacitors
Variable capacitors are mostly used in radio tuning circuits, and they are sometimes called “tuning capacitors.” They have very small capacitance values, typically between 100pF and 500pF.

Trimmers
The trimmer is actually an adjustable or variable capacitor, which uses ceramic or plastic as a dielectric. Most of them are color coded to easily recognize their tunable size. The ceramic type has the value printed on them. Colors are: yellow (5pF), blue (7pF), white (10pF), green (30pF), and brown (60pf).

Capacitors in Series
When capacitors are placed in series, the effective plate separation is increased and the total capacitance is less than that of the smallest capacitor. Additionally, the series combination is capable of withstanding a higher total potential difference than any of the individual capacitors. Figure 4 is a simple series circuit. The bottom plate of C1 and the top plate of C2 will be charged by electrostatic induction. The capacitors charge as current is established through the circuit. Since this is a series circuit, the current must be the same at all points. Since the current is the rate of flow of charge, the amount of charge (Q) stored by each capacitor is equal to the total charge. 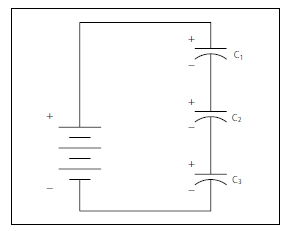