The measurement of electrical power requires that voltage and current both be mea­sured simultaneously. Remember that power is the product of the voltage and current. That is, watts (P) equals volts (E) times amperes (I), written as P = El. In fact, watts are sometimes called volt-amperes in a dc circuit. 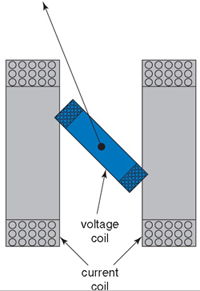 You might think that you can just connect a voltmeter in parallel with a circuit, thereby getting a reading of the voltage across it, and also hook up an ammeter in series to get a reading of the current through the circuit, and then multiply volts times am­peres to get watts consumed by the circuit. And in fact, for practically all dc circuits, this is an excellent way to measure power (Fig. 3-10).

Quite often, however, it's simpler than that. In many cases, the voltage from the power supply is constant and predictable. Utility power is a good example. The effec­tive voltage is always very close to 117 V. Although it's ac, and not dc, power can be mea­sured in the same way as with dc: by means of an ammeter connected in series with the circuit, and calibrated so that the multiplication (times 117) has already been done. Then, rather than 1 A, the meter would show a reading of 117 W, because P = El = 117 X 1 = 117 W. If the meter reading were 300 W, the current would be 300/117 = 2.56 A.

An electric iron might consume 1000 W, or a current of 1000/117 = 8.55 A. And a large heating unit might gobble up 2000 W, requiring a current of 2000/117 = 17.1 A. This might blow a fuse or breaker, since these devices are often rated for only 15 A. You've probably had an experience where you hooked up too many appliances to a single circuit, blowing the fuse or breaker. The reason was that the appliances, combined, drew too much current for the house wiring to safely handle, and the fuse or breaker, detecting the excess current, opened the circuit.

Specialized wattmeters are necessary for the measurement of radio-frequency (RF) power, or for peak audio power in a high-fidelity amplifier, or for certain other spe­cialized applications. But almost all of these meters, whatever the associated circuitry, use simple ammeters as their indicating devices.

Fig. 3-10 Power can be measured with a voltmeter and an ammeter.