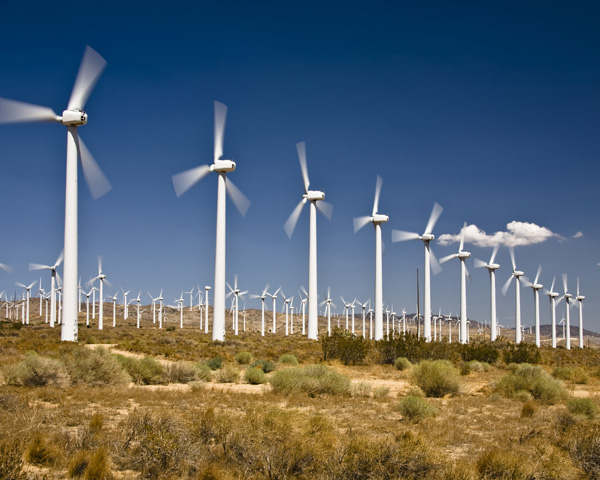 Windmills for electricity - Mankind been harnessing the wind's energy for many years. From Holland to traditional farms around the world, windmills were used in the past for pumping water through primative irrigation systems or used to grind grain. Then, the wind turned large "sails" which were connected by a long vertical shaft that was attached to a grindnig machine or to a wheel that turned and drew water from a well. Today's turbines - can utilize the energy of the wind to turn large metal blades which in turn spins a generator that manufactures electric power.

From the mid 1970's through the mid 1980's the United States government worked with industry to advance the technology of Windmills For Electricity and enable large commercial wind turbines. This effort was led by NASA at the Lewis Research Center in Cleveland, Ohio and was an extraordinarily successful government research and development activity. With funding from the National Science Foundation and later the Department of Energy (DOE), a total of 13 experimental wind turbines were put into operation including four major wind turbine designs. This research and development program pioneered many of the multi-megawatt turbine technologies in use today, including: steel tube towers, variable-speed generators, composite blade materials, partial-span pitch control, as well as aerodynamic, structural, and acoustic engineering design capabilities. The large Windmills For Electricity developed under this effort set several world records for diameter and power output. The Mod-2 wind turbine cluster produced a total of 7.5 megawatt of power in 1981. In 1987, the Mod-5B was the largest single wind turbine operating in the world with a rotor diameter of nearly 100 meters and a rated power of 3.2 megawatts. It demonstrated an availability of 95 percent, an unparalleled level for a new first-unit wind turbine. The Mod-5B had the first large-scale variable speed drive train and a sectioned, two-blade rotor that enabled easy transport of the blades.

In the 1990s, as aesthetics and durability became more important, turbines were placed atop steel or reinforced concrete towers. Small generators are connected to the tower on the ground, then the tower is raised into position. Larger generators are hoisted into position atop the tower and there is a ladder or staircase inside the tower to allow technicians to reach and maintain the generator.

Originally Windmills For Electricity were built right next to where their power was needed. With the availability of long distance electric power transmission, wind generators are now often on wind farms in windy locations and huge ones are being built offshore, sometimes transmitting power back to land using high voltage submarine cable. Since wind turbines are a renewable means of generating electricity, they are being widely deployed, but their cost is often subsidised by taxpayers, either directly or through renewable energy credits. Much depends on the cost of alternative sources of electricity. Wind generator cost per unit power has been decreasing by about four percent per year.

The most modern generations of Windmills for electricity are more properly called wind turbines, or wind generators, and are primarily used to generate electric power. Modern windmills are designed to convert the energy of the wind into electricity. The largest wind turbines can generate up to 6MW of power (for comparison a modern fossil fuel power plant generates between 500 and 1,300MW).