What Is Renewable Energy? 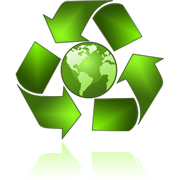 What Is Renewable Energy? Renewable Energy is popularly considered as any source of sustainable energy that has as its source the renewable, natural environment. Most souces of renewable energy include wind energy, solar energy, water energy and biomass energy, as well as geothermal energy. In most cases, renewable energies are replenished by the natural environment. Non renewable energy resources, such as fossil fuels, cannot be replenished. After all, it took eons of time to create deposits of fossil fuels sources and these deposits are in very limited supply and cannot be replaced.

Wind energy, solar energy, water energy and biomass and geothermal energies comprise most of the plantet's renewable energy sources. Solar energy can be turned into electric power through the use of photovoltaic panels. This electric power can be consumed by many electrical appliances.

What Is Renewable Energy? These are systems that are a key part of the portfolio of electricity solutions. For example, today, traditional biomass represents the most important source of power in the developing world, with a 36 per cent share of total electricity consumption. Used in a sustainable way, biomass and other RE sources do not generate additional greenhouse gas emissions.

RE solutions offer many advantages. Since they use indigenous energy sources like wind, the sun, and rivers of water, they contribute to supply security by reducing reliance on electricity imports. There are a variety of national situations in terms of needs and resources, but renewable ernergy resources are largely available in most developing and developed countries. Creating an enabling environment which contributes directly to local economic development. Renewable energy installations bring jobs, capital, and sources of revenue to local communities, often to rural areas where these benefits are needed most.

In certain remote locations, where electricity and/or fossil fuel infrastructure does not reach, RE systems can be the only cost effective option. In addition, modern renewable energy systems generate far less air pollution and greenhouse gas emissions than fossil energy systems thus reducing the threat of climate change and health risks. Depending on the installation, renewable ener gy projects may be smaller in scale and not as technically complex to operate and maintain as conventional energy projects. For all of these reasons, renewable energy is a valuable resource in addressing the world’s growing electricity needs.

RE form a relatively small part of the commercial energy portfolio today, but the costs of developing, installing, and delivering renewable energy to consumers have been falling, due largely to improvements in system designs and manufacturing techniques. In many applications, particularly in those instances where gaining access to conventional energy systems is difficult or costly, the market share of RE has been growing steadily in recent years.

What Is Renewable Energy? Characterising the impact of cost reductions and market share increases is the “learning curve.” Simply speaking, RE manufacturers and developers gain valuable experience with each new installation. The level of industrial experience with conventional energy systems is many decades longer than that for renewable energy systems. With modern research, development, and technology transfer techniques at their disposal, the RE industries have achieved progress. But because of this relative immaturity of some ernergy sources, many industry analysts expect cost reductions and performance improvements to continue at a faster pace in the RE sector, thus gaining greater competitiveness and increasing the likelihood that RE uptake will expand in the future.