Of all the energy currently consumed in Canada, about 3,700 PJ (46%) is used to generate electricity. Canada has approximately 112 GW of installed electricity generation capacity, and produces approximately 561,805 GWh of electricity annually11 , resulting in a $27 B/yr business12 . Most electricity generation, transmission and distribution have traditionally been handled by vertically integrated provincial monopolies. This resulted in the construction of large-scale centralized power generation facilities and massive transmission systems owned by the same generator. The market is currently evolving under new deregulation guidelines. 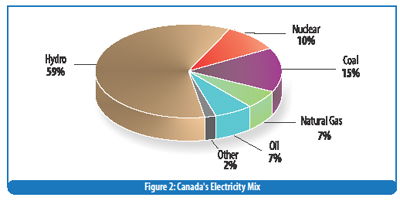 There are currently five main sources of power generation in Canada: natural gas, oil, coal, hydro (larger systems), and nuclear. The smallest component is from "other" sources (<2%), which includes renewable power generation. The National Energy Board estimates that "other" renewable power generation sources will reach 5.5 GW of installed capacity under the Business As Usual scenario, or 16.1 GW under the Techno-Vert scenario13, by the year 2025.Projection figures vary considerably throughout the industry and among government departments and jurisdictions,but are sufficient to provide a range from which to make some reasonable assessments.

Each sub-sector is examined for its potential to produce electricity and displace conventional fossil fuel electricity generation. Some of the fuels may have other - or even better - applications involving renewable power generation. 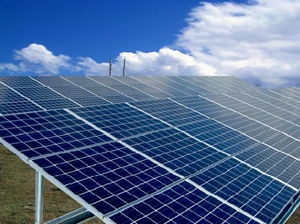 Solid Biomass combustion is the most prominent form of biomass use in Canada. Biomass co-generation is already used widely in the pulp and paper industry for power, space and process heating. It is an established technology which needs improvement, but has not been a strong focus of biotechnology research and development.