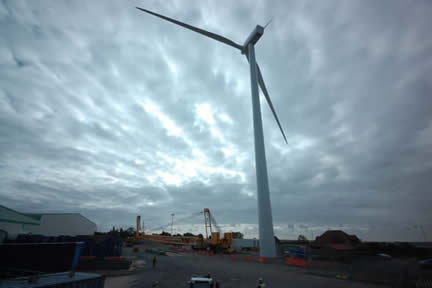 The sun is one gigantic star that constantly radiates an enormous amount of energy (solar energy). How much is "enormous?" Well, let's just say that the sun sends out more energy in one second than Earth has used since the beginning of time. Like most stars, the sun is a huge ball of gas made up mostly of helium gas and hydrogen.

The Earth, being the third planet from the sun, only receives a small portion of the sun's solar energy, however, that amount is more than enough to supply all our electric power needs.

Two ways to make electricity from solar power are photovoltaic and solar thermal systems. Photovoltaic electric generation is produced using photovoltaic (PV) cells: the sunlight hits the solar cell and converts sunlight into electricity instantly and silently--without the hassle of wearing out any mechanical parts. These solar systems are mainly used to generate power in areas that are a long distance from electric power lines.

Solar power is expected to be a global supplier of electricity between 2015 and 2020. Solar power's benefits are phenomenal: it's free, its supply can never deplete, it doesn't pollute, and it doesn't damage the environment.

The sun’s heat reaching the planet earth creates winds, which makes wind a form of solar energy. How does it work? Well, as the sun's rays heat the Earth’s air is heated by the sun, it expands and regions of high and low pressure are formed, these high and low movements create wind energy.

Harnessing wind energy is done using contraptions such as wind turbines. Large wind turbines are built close together to operate on wind farms to produce large amounts of power for electrical utilities. Smaller small wind turbines can be used by homeowners and remote villages who want to generate their own electricity.

Biomass energy is a way to turn your food waste into electricity. Biomass is any kind of organic matter (anything that was once alive) that can be used as an energy source. Besides food waste, crops, wood, animal and yard waste are examples of biomass. People have used this form of alternative energy for thousands of years - longer than any other energy source.

Biomass feedstock (farm animal wastes, crops and residues, etc.) is the main ingredient of biomass energy. The heat in this form of alternative energy is used to generate power, fuels and other energy options. The biomass fuels (or biofuels), which comes from biomass feedstock, can be used in a solid, liquid, or gas state. Disposed food, paper, sewage, lawn clippings and sawdust, are some available biomass energy resources used for power production.

Geothermal is a Greek word: geo (earth) and therme (heat). This form of alternative energy comes from the heat, which is from the earth's core (almost 4,000 miles beneath the earth’s surface). Earth's double-layered core is made from melted rock (hot magma), which surrounds a solid iron center. The heat comes from the slow decay of radioactive particles produce high temperatures that constantly rise to the earth's surface. Geothermal electricity is created by pumping a fluid (oil or water) into the Earth, allowing it to evaporate and using the hot gases vented from the earth's crust to run turbines linked to electrical generators.

In some areas on the planet (such as Iceland), there is very hot water or steam that is close enough to the surface where this alternative energy resource can be reached economically with a drill. When obtained, the steam, or hot water flashed to steam, turns a turbine, which then, turns a generator that produces electricity. Many experts believe that geothermal energy only be a minor contributor to the global energy supply because of the scarcity of geothermal sites in the world.