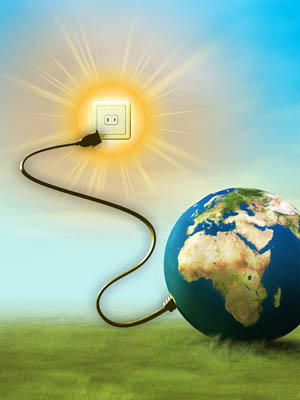 The BCG study predicts that solar PV (photovoltaic) will reach its cost competitiveness by 2015 to 2020 in the sunny regions of the world. However, the intermittency of PV's energy generation won't reach its full potential until technology breakthroughs are made in energy storage.

Taking a look back into the last five years, it's clear that solar PV has significantly grown (up from 1.1 gigawatts in 2004 to 7.3 gigawatts in 2009, which is a 46 per cent annual increase). Today, solar panels are divided into two applications. Individual or small groups of panels can be used for distributed solar generation and larger groups of panels can be used to create utility-scale projects (also known as solar farms.) The underlying economics of the two applications are not that different, although solar farms can produce electricity at cheaper rates.

Concentrated solar power (CSP) is another alternative energy power technology that is on its way to becoming a cost-competitive option - and soon (between 2015 and 2020). The beauty of this alternative energy power technology is that it can provide on-demand power through cost-effective thermal storage. Limitations to infrastructure and deployment barriers are significant, but surmountable.

CSP is still small in terms of global power-generation capacity, but installed GSP capacity is expected to rise eightfold from 2009 (roughly one gigawatt) through 2015 (to more than eight gigawatts). Costs must drop for this alternative energy power technology to reach its full potential.

Many alternative energy power sources are capped due to their intermittent nature, but technologies like smart grid helps to accelerate their growth in the global energy marketplace.

By definition, a "smart grid" is a collection of equipment, infrastructure and information technologies designed to optimize the production, transmission and usage of electricity.