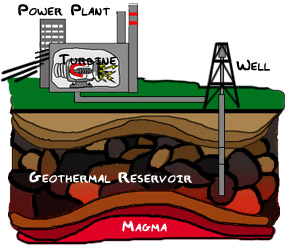 Geothermal energy comes from heat stored beneath the Earth's surface. Also known as thermal energy, geothermal is considered to be an alternative energy because it produces very little greenhouse gas emissions (GHG), which harm the Earth once it's generated into electricity. Geothermal wells release these greenhouse gases, but not nearly as much as its fossil fuel counterparts oil and coal.

Alternative energy geothermal is a product from Earth's original formation: radioactive decay of minerals thanks to volcanic eruptions and solar energy digested and stored from the Earth's surface. Thermal energy is produced from the continuous conduction of heat that emanates from the Earth's core that moves upward to the surface. This process is known as the geothermal gradient. If you've ever had the opportunity to bathe in hot springs, you'll be glad to know that the thermal heat comes from beneath the Earth.

Alternative Energy Geothermal - How can we use it?

Energy producers have been able to convert alternative energy geothermal into electricity. These same producers have high hopes for geothermal energy because power can be generated 24 hours a day, unlike other intermittent renewable energies, like wind energy and solar energy.

Geothermal energy can also be used to heat pumps or for other direct uses such as cooling and heating buildings. The Earth's crust temperature a few feet below is buffered to a constant seven to 14 °C (45 to 58 °F), so a liquid can be pre-heated or pre-cooled in underground pipelines, providing no-cost cooling during the summer, and with a heat pump, heating during the winter months. Other direct uses include aquaculture, agriculture (greenhouses), and industry.

There are different ways to produce alternative energy geothermal. Two popular processes include: