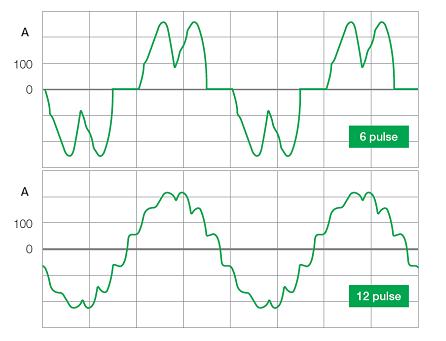 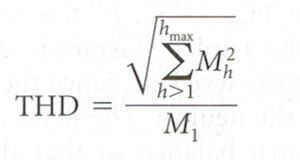 Total harmonic distortion is a very useful quantity for many applications, such as audio systems, but its limitations must be realized. It can provide a good idea of how much extra heat will be realized when a distorted voltage is applied across a resistive load. Likewise, it can give an indication of the addition losses caused by the current flowing through a conductor. However, it is not a good indicator of the voltage stress within a capacitor because that is related to the peak value of the voltage wave form, not its heating value. The THD index is most often used to describe voltage harmonic distortion, as in an audio signal in which the input signal and the output signal must match the sine wave in order to eliminate crossover distortion. Harmonic voltages are almost alwys referenced to the fundamental value of the waveform at the time of the sample. Because voltage varies only a few percent, the voltage THD is nearly always a meaningful number.

Current distortion levels can be characterized by a THD value, as described above, but this can often be misleading. A small current may have a high THD but not be a significant threat to the system. For example, many adjustable speed drives will exhibit high THD values for the input current when they are operating at very light loads. This is not necessarily a significant concern because the magnitude of harmonic current is low, even though its relative current distortion is high.

where I is the peak, or maximum demand load current at the fundamental frequency component measured at the point of common coupling (PCC). There are two ways to measure 'L• With a load already in the system, it can be calculated as the average of the maximum demand current for the preceding 12 months. The calculation can simply be done by averaging the 12-month peak demand readings. For a new facility, 'L has to be estimated based on the predicted load profiles.

In analyzing harmonic problems, the response of the power system is equally as important as the sources of harmonics. But there must be an accurate measurement of the sinusoidal signal. This is done with a thd analyzer. In fact, power systems are quite tolerant of the currents injected by harmonic-producing loads unless there is some adverse interaction with the impedance of the system. Identifying the sources is only half the job of harmonic analysis. The response of the power system at each harmonic frequency determines the true impact of the nonlinear load on harmonic voltage distortion.