Dissolved gas analysis (DGA) provides the early warning radar view of a transformer ﬂeet with a non-intrusive screening process for early identiﬁcation of problematic transformers. Suspicious transformers can be subjected to more invasive and costly physical testing to determine the actual condition and service readiness of the transformer. Three case histories illustrate the usefulness of recent innovations in transformer DGA, especially when there is gas loss. Two of the example transformers failed in service, to the surprise of the utilities responsible for them since they did not exceed conventional DGA limits. In the other case, the utility is urgently looking for a replacement unit based on very concerning DGA results. For these examples we will use some of the techniques presented earlier in this series of articles. We will also introduce some new concepts to be covered in greater detail in later articles of the series. For example, we will use cumulative gas data to compensate partially for gas loss. Gas loss occurs either by leakage or by gas blanket pressure regulation, which releases head space gas to reduce pressure and adds nitrogen to raise pressure. The IEEE C57.104 transformer DGA guide, from 1978 until the latest version in 2019 [1], has never adequately addressed the problem of gas loss, which can delay or prevent limits-based detection of fault gas production. We will also use normalized fault energy indices (NEI), which represent the energy required to generate the observed fault gases from the paper and oil insulation. This will illustrate a new paradigm for DGA interpretation, described brieﬂy in Annex F of IEEE C57.104-2019, that is less focused on gas concentrations in favor of fault energy related to defects, malfunctions, and excessive stress. Rather than display long tables of numbers, we present the DGA data for the examples graphically in the form of three stacked charts for each example. The top chart is for the hydrocarbon gas fault energy index, NEI-HC, representing fault energy aﬀecting the mineral oil. The upper trend line is cumulative NEI-HC, while the lower one is NEI-HC as calculated for each oil sample. Boxes are drawn on the cumulative NEI trend line to highlight time intervals when signiﬁcant fault gas production appears to be happening. The middle chart is for the carbon oxide gas fault energy index, NEI-CO, representing fault energy aﬀecting paper insulation in a similar fashion. The bottom chart is for the CO/CO2 gas concentration ratio as calculated for each oil sample. 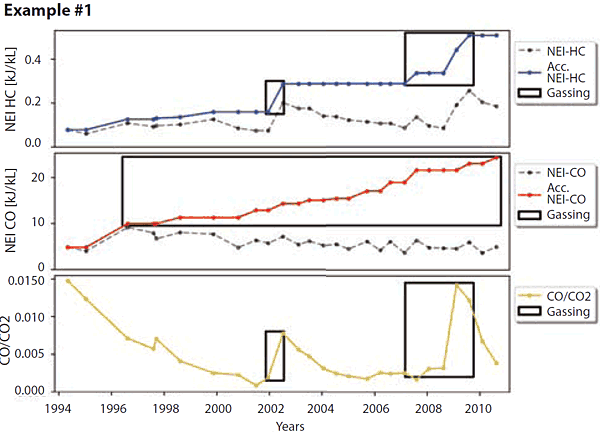 The transformer in Example #1 had a long NEI-CO gassing event, suggesting gradual thermal degradation of insulating paper. The up and down motion of NEI-CO (bottom line in the NEI-CO chart) is not just noise in the data – it reﬂects fault gas production with gas loss from pressure regulation connected with thermal cycling in a hot climate and a 6-month sampling frequency. The cumulative NEI-HC trend has two distinct gassing events with IEC fault types S and O respectively, indicating thermal fault gas production below 250°C. There are corresponding large increases in the CO/CO2 ratio, suggesting charring of winding paper insulation. The method of interpreting percent changes in the CO/CO2 carbon oxide gas ratio (sometimes inverted as CO2/CO) was worked out by Chris Rutledge and Randy Cox as a way of locating the source of carbon oxide gas production [2, 3]. Large percent increases in CO/CO2 are associated with charring of winding insulation paper. Of course, degradation of winding insulation is of great interest. When this transformer tripped due to turn-to-turn arcing, it was a complete surprise to the utility. The transformer never exceeded IEEE C57.104-2008 gas concentration limits, nor did it exceed the IEEE C57.104-2019 rate of change limits. The Example #1 charts, providing evidence of continual paper degradation with two signiﬁcant episodes of a low range thermal fault aﬀecting winding insulation, would have led an experienced engineer to ﬂag this unit for investigation. The concern would be heightened by the realization that the severity of the problem may have been underestimated due to gas loss. A post-mortem revealed extensive charring of the paper winding insulation. 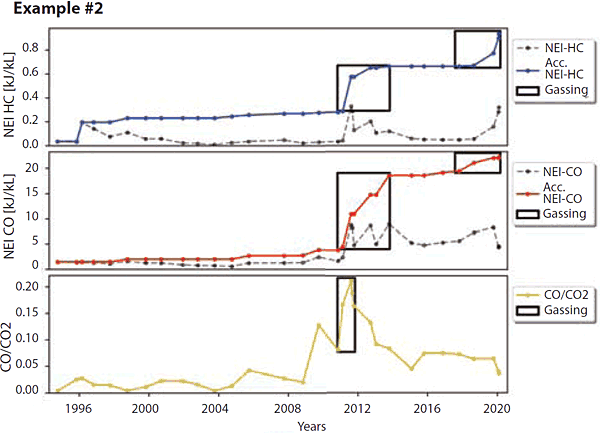 The transformer in Example #2 appears to be in very precarious condition, and the utility responsible for it is planning to replace it quickly. The gassing event beginning in 2012 appeared to indicate a T2 hot spot aﬀecting both paper insulation (NEI-CO) and oil (NEI-HC). Gas loss due to pressure regulation is evident from the saw-tooth patterns in NEI-HC and NEI-CO during the event as gases were generated and lost. The cumulative NEI trends show that there was rapid fault gas production, although the true extent of it can’t be known. The percent increase in the CO/CO2 ratio at the time was extreme, suggesting that winding paper was aﬀected. Gaseous evidence of the problem dissipated in subsequent years as gas loss lowered the NEI levels and ﬂattened the cumulative NEI. Recently a new event, classiﬁed as a D1 type fault, or low-energy electrical discharge, has been active, once again aﬀecting the paper as indicated by a simultaneous rise in NEI-CO. The current hypothesis is that the fault starting in 2012 may have charred paper insulation between windings. Weak turn-to-turn discharges started later in 2018. The lack of movement in the CO/CO2 ratio during the most recent NEI event provides no information as to the location of paper involved in the recent event. If the problem is localized charring of winding paper between turns resulting in the onset of electrical sparking, CO and CO2 production would cease after the paper in that area was completely charred. Thus, the lack of recent carbon oxide gas production could be very concerning. Gas concentrations during the 2012 event only reached IEEE status code 2, soon returning back to status code 1 due to gas loss. Damage to the transformer did not magically repair itself, despite a de-escalation to a lower status code. 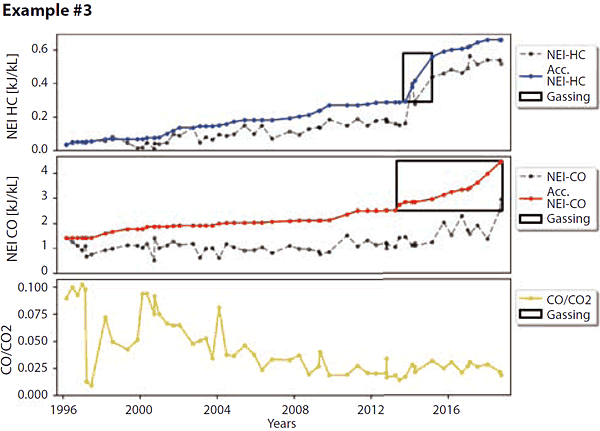 The Example #3 transformer had a persistent T2 thermal problem with long, steady NEI-HC and NEI-CO trends. In 2013, the NEI-HC trend accelerated sharply, indicating that something may have changed for the worse. For a while, acetylene production changed the fault type to a D1 electrical discharge. The gases other than acetylene remained below IEEE C57.104-2008 limits. Later the acetylene dissipated as the original trend resumed. The NEI-CO graph indicates that starting in 2013 there was an accelerating rate of change in cumulative NEI-CO leading up to the time of failure. The sawtooth pattern in the measured NEI-CO during that time can be attributed to gas blanket pressure regulation. Just as the unit reached status level 2 by exceeding the IEEE C57.104-2008 heat gas limits, the unit failed. The transformer never reached status level 3 except for the bump in acetylene during the 2013 event. The CO/CO2 ratio did not change much since 2006. It is likely that CO loss via gas blanket pressure regulation was suﬃcient to keep the CO/CO2 ratio relatively constant even though, as the upward trend in NEI-CO indicates, there was signiﬁcant production of carbon oxide gases. Thus, in this case DGA did not provide any indication of whether winding paper insulation was being aﬀected by the T2 and D1 faults. The fact that the transformer failed while NEI-CO was accelerating permits us to suspect that the problem was located in the windings, speciﬁcally on the outer layers where oil can circulate.

Conclusions
The way of interpreting DGA demonstrated above requires tracking fault energy aﬀecting liquid and solid insulation over the whole history of the transformer. Data management and good data quality are extremely important for early detection and accurate assessment of problems. DGA results for the most recent one or two oil samples are not suﬃcient to detect or diagnose the problems discussed in the above examples. These case histories show that waiting for a 90th percentile outlier in the DGA data is not a dependable method for identifying transformers in trouble. Waiting to see large concentrations or rates of increase of gas in any transformer before reacting is like waiting to read the license plate before getting out of the way of an oncoming car. Gas loss can keep gas levels and rates of change deceptively low, even when there is signiﬁcant production of fault gas. A DGA report is a snapshot of an evolving and dynamic process, like a frame of a movie. To understand the current results properly, it is necessary to consider them in the context of as many past results as possible. The outcome of DGA interpretation is an assessment of whether the transformer appears to be producing fault gas, and if it does, to support further investigation or action by trying to guess the nature of the problem and assess risk. Usually DGA cannot provide a deﬁnite verdict on the transformer’s condition except to say whether or not it is gassing. That is reﬂected in the change of language in IEEE C57.104-2019, which has “status” codes instead of “condition” codes. For reliable information about a transformer’s condition, physical testing is usually required. In future articles, we will discuss the CO/CO2 ratio in more detail. We will also discuss severity assessment for gassing events and hazard factors for quantitative risk assessment.