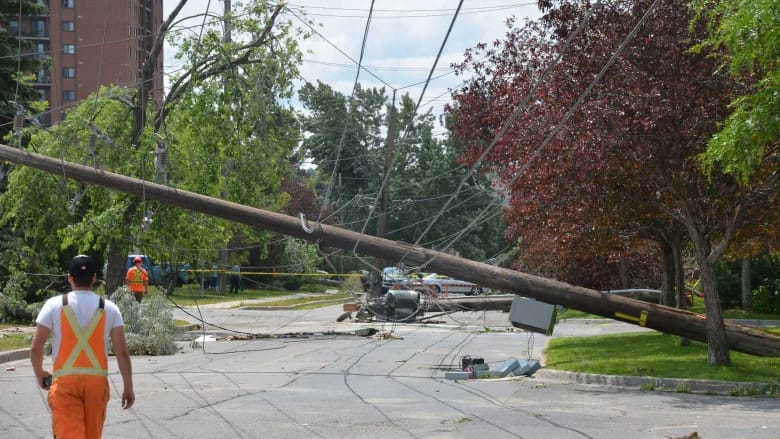 Sudbury Hydro says power should be restored by the weekend

The utility's spokesperson, Wendy Watson, says the power in the affected New Sudbury neighbourhoods should be back on by the weekend.

The storm, which Environment Canada said was classified as a microburst or straight line wind damage, downed a number of power lines in the city.

Now crews are struggling with access to the lines as they work to reconnect service in the area.

"In some cases, you can't get to someone's back yard, or you have to go through the neighbour's yard," Watson said.

"We have one case where [we had] equipment working over a swimming pool. It's dicey, it's really dirty and it's dangerous."

Veteran arborist Jim Allsop told CBC News he hasn't seen damage like this in his 30-plus years in the business.

"I don't know how many we've done up to date, but I have another 35 trees on houses," Allsop said. "We'll be probably another week."

"We've rented a crane to help speed up the process, and increase safety, and we're getting five or six done in our 12-hour days."

Scott Aultman, a lineman with North Bay Hydro, said he has seen a few storms in his career, and isn't usually surprised by extensive damage a storm can cause.

"When you see a trailer on its side, you know, you don't see that every day," Aultman said.

But during the clean up, Aultman said the spirit of camaraderie runs high with crews from different areas.

"We were pumped. It's part of the trade, everybody gets together," Aultman said. "We had a big storm in 2006 and the Sudbury guys were up helping us, so it's great, it's nice to be able to return the favour and help them out."