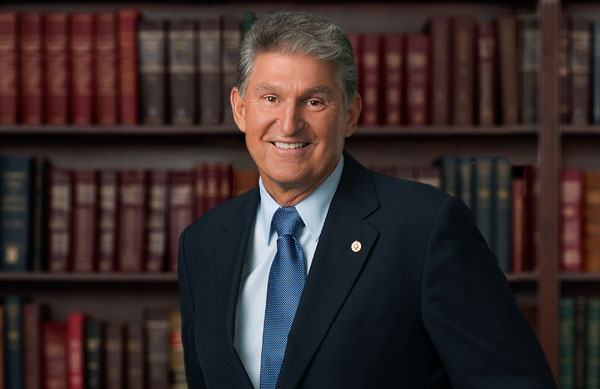 WASHINGTON - Today, U.S. Senator Joe Manchin (D-WV), Chairman of the Senate Energy and Natural Resources Committee, delivered the following remarks during a full committee hearing to examine ways to strengthen the energy and mineral partnership between the U.S. and Canada to address energy security and climate objectives.

Chairman Manchin’s remarks can be viewed as prepared here or read below:

Today we’re welcoming our friends from the North, from Canada, to continue this committee’s very important conversation about how we pursue two critical goals – ensuring energy security and addressing climate change.

These two goals aren’t mutually exclusive, and it’s imperative that we address both.

We all agree that Putin has used Russia’s oil and gas resources as a weapon to inflict terrible pain on the Ukrainian people and on Europe.

But Putin’s aggression is bringing the free world closer together, setting the stage for a new alliance around energy, minerals, and climate.
Building this alliance should start here in North America. And that’s why I’m excited to hear today about how we can strengthen the energy and minerals partnership between the U.S. and Canada.

I recently had the privilege of being hosted in Alberta by Premier Kenney, where I spent two days getting a better understanding of our energy, minerals, and manufacturing partnership through meetings with representatives from Alberta, Saskatchewan, the Northwest Territories, the federal government, and tribal and industry partners.

Canadians and Americans share a deep history and are natural partners, sharing the longest land border on the planet.

Our people fought side-by-side in two world wars. In fact, some of the uranium used by the Manhattan Project was mined in Canada’s Northwest Territories and refined in Ontario.

We have cultivated a strong manufacturing partnership, particularly in the automotive industry, with Canada today being our biggest export market for vehicles. Cars assembled in Canada contain, on average, more than 50% of U.S. value and parts.

Today we also trade over 58 terawatt hours of electricity, 2.4 billion barrels of petroleum products, and 3.6 trillion cubic feet of natural gas each year.

In fact, energy alone represents $120 billion of the annual trade between our countries. Across all sectors the U.S. and Canada trade more than $2 billion per day.
There is no better symbol of our energy relationship than our interconnected power grid which is seamless and integral for the reliable and affordable electricity citizens and industries in both our countries depend on.

And we’re here for each other during times of need. Electricity workers from both the U.S. and Canada regularly cross the border after extreme weather events to help get the power back on.

Canada has ramped up oil exports to the U.S. to offset Russian crude after members of our committee led legislation to cut off the energy purchases fueling Putin’s war machine.

Canada is also a leading supplier of uranium and critical minerals to the U.S., including those used in advanced batteries—such as cobalt, graphite, and nickel.
The U.S-Canada energy partnership is strong, but also not without its challenges. I’ve not been shy in expressing my frustration that the Biden administration cancelled the Keystone XL pipeline.

In light of Putin’s war in Ukraine and the global energy price surge, I think a lot of us wish that project had moved forward.

But to be clear, I’m not holding this hearing to re-litigate the past. We are here to advance a stronger and cleaner U.S.-Canada energy partnership for the future.
Our allies and trading partners in Europe are begging for North American oil and gas to offset their reliance on Russia.

There is no reason whatsoever we shouldn’t be able to fill that void, and do it cleaner than the alternatives.

That’s because American oil and gas is cleaner than what is produced in Russia – and certainly in Iran and Venezuela. We can do better, and learn from our Canadian neighbors.

On average, Canada produces oil with 37% lower methane emissions than the U.S., and the Canadian federal government has set even more aggressive methane reduction targets.

That’s what I mean by climate and security not being mutually exclusive – replacing Russian product has the added benefit of reducing the emissions profile of the energy Europe needs today.

According to the International Energy Agency, stationary and electric vehicle batteries will account for about half of the mineral demand growth from clean energy technologies over the next twenty years.

I also strongly believe we need to be taking security into account as we invest in climate solutions.

It makes no sense whatsoever for us to so heavily invest in electric vehicles as a climate solution when that means increasing our reliance on China, because right now we’re not simultaneously increasing our mining, processing, and recycling capacity at the same rate in the United States.

The Canadians are ahead of us on critical minerals refining and processing, and we have much to learn from them about how they’re able to responsibly permit these activities in timelines that blow ours out of the water.

I’m sure our Canadian friends are happy to export minerals to us, but let me be clear, the United States also needs to contribute our part to a North American minerals alliance.

So I’m interested in discussing how we can create an integrated network for raw minerals to move across our borders for processing and manufacturing in both of our countries.

I believe there is much we can collaborate on with Canada to create a powerful North American critical minerals supply chain instead of increasing China’s geopolitical leverage.

During this time when the U.S., Canada, and our allies and friends are threatened both by dictators weaponizing energy and by intense politicization over climate issues, we must work together to chart a responsible path forward that will ensure security and unlock prosperity for our nations.

We are the superpower of the world, and blessed with abundant energy and minerals resources. We cannot just sit back and let other countries fill the void and find ourselves in a more dire situation in the years ahead.

We must be leaning into the responsible production of all the energy sources we’re going to need, and strengthening strategic partnerships – building a North American Energy Alliance.