LOS ANGELES - Two years ago, one freezing December night on a California rooftop, a tiny light shone weakly with a little help from the freezing night air. It wasn't a very bright glow. But it was enough to demonstrate the possibility of generating renewable power after the Sun goes down.

"Our work highlights the many remaining opportunities for energy by taking advantage of the cold of outer space as a renewable energy resource," says Raman.

"We think this forms the basis of a complementary technology to solar. While the power output will always be substantially lower, it can operate at hours when solar cells cannot."

For all the merits of solar energy, it's just not a 24-7 source of power. Sure, we can store it in a giant battery or use it to pump water up into a reservoir for later, but until we have more economical solutions, nighttime is going to be a quiet time for renewable solar power.

Most of us return home from work as the Sun is setting, and that's when energy demands spike to meet our needs for heating, cooking, entertaining, and lighting.

Unfortunately, we often turn to fossil fuels to make up the shortfall. For those living off the grid, it could require limiting options and going without a few luxuries.

Shanhui Fan understands the need for a night time renewable power source well. He's worked on a number of similar devices, including a recent piece of technology that flipped photovoltaics on its head by squeezing electricity from the glow of heat radiating out of the planet's Sun-warmed surface.

While that clever item relied on the optical qualities of a warm object, this alternative device makes use of the good old thermoelectric effect.

Using a material called a thermocouple, engineers can convert a change in temperature into a difference in voltage. This demands something relatively toasty on one side and a place for that heat energy to escape to on the other.

The theory is the easy part – the real challenge is in arranging the right materials in such a way that they'll generate a voltage from our cooling surrounds that makes it worthwhile.

To keep costs down, the team used simple, off-the-shelf items that pretty much any of us could easily get our hands on.

They put together a cheap thermoelectric generator and linked it with a black aluminium disk to shed heat in the night air as it faced the sky. The generator was placed inside a polystyrene enclosure sealed with a window transparent to infrared light, and linked to a single tiny LED. 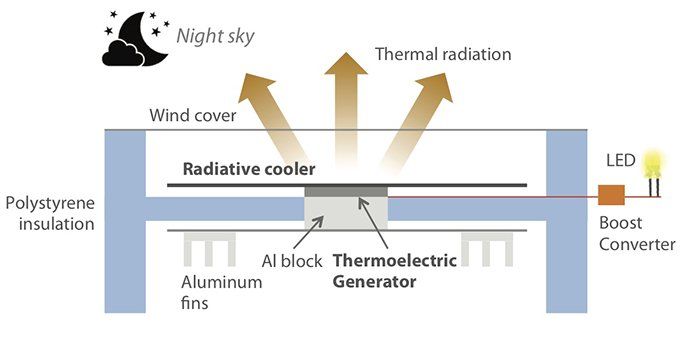 For six hours one evening, the box was left to cool on a roof-top in Stanford as the temperature fell just below freezing. As the heat flowed from the ground into the sky, the small generator produced just enough current to make the light flicker to life.

That might just be enough to keep a hearing aid working. String several together and you might just be able to keep your cat amused with a simple laser pointer. So we're not talking massive amounts of power.

But as far as prototypes go, it's a fantastic starting point. The team suggests that with the right tweaks and the right conditions, 500 milliwatts per square metre isn't out of the question.

"Beyond lighting, we believe this could be a broadly enabling approach to power generation suitable for remote locations, and anywhere where power generation at night is needed," says Raman.

While we search for big, bright ideas to drive the revolution for renewables, it's important to make sure we don't let the smaller, simpler solutions like these slip away quietly into the night.

This research was published in Joule.