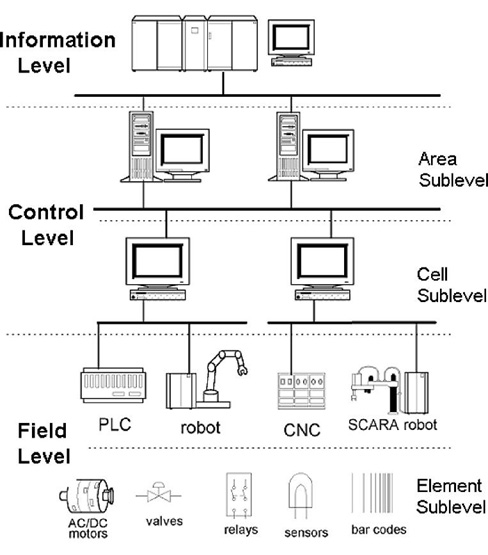 The industrial automation systems can be very complex, and it is usually structured into several hierarchical levels. Each of the hierarchical level has an appropriate communication level, which places different requirements on the communication network. Figure 1.1 shows an example of the hierarchy of an industrial automation system.

We primarily use sensor and actuator buses to connect simple, discrete devices with limited intelligence, such as a photo-eye, limit switch, or solenoid valve, to controllers and computers. Sensor buses such as ASI and CAN are designed so information flow is reduced to a few bits and the cost per node is a critical factor.

The lowest level of the automation hierarchy is the field level, which includes the field devices such as actuators and sensors. The elementary field devices are sometimes classified as the element sublevel. The task of the devices in the field level is to transfer data between the manufactured product and the technical process. The data may be both binary and analogue. Measured values may be available for a short period of time or over a long period of time.

For the field level communication, parallel, multiwire cables, and serial interfaces such as the 20mA current loop has been widely used from the

Field-level industrial networks are a large category, distinguished by characteristics such as message size and response time. In general, these networks connect smart devices that work cooperatively in a distributed, time-critical network. They offer higher-level diagnostic and configuration capabilities generally at the cost of more intelligence, processing power, and price. At their most sophisticated, fieldbus networks work with truly distributed control among intelligent devices like FOUNDATION Fieldbus. Common networks included in the devicebus and fieldbus classes include CANOpen, DeviceNet, FOUNDATION Fieldbus, Interbus-S, LonWorks, Profibus-DP, and SDS.

Nowadays, the fieldbus is often used for information transfer in the field level. Due to timing requirements, which have to be strictly observed in an automation process, the applications in the field level controllers require cyclic transport functions, which transmit source information at regular intervals. The data representation must be as short as possible in order to reduce message transfer time on the bus.

At the control level, the information flow mainly consists of the loading of programs, parameters and data. In processes with short machine idle times and readjustments, this is done during the production process. In small controllers it may be necessary to load subroutines during one manufacturing cycle. This determines the timing requirements. It can be divided into two: cell and area sublevels.

For the cell level operations, machine synchronizations and event handlings may require short response times on the bus. These real-time requirements are not compatible with time-excessive transfers of application programs, thus making an adaptable message segmentation necessary.

In order to achieve the communication requirements in this level, local area networks have been used as the communication network. After the introduction of the CIM concept and the DCCS concept, many companies developed their proprietary networks for the cell level of an automation system. The Ethernet together with TCP/IP (transmission control protocol/internet protocol) was

accepted as a de facto standard for this level, though it cannot provide a true real-time communication.

Many efforts have been made for the standardization of the communication network for the cell level. The IEEE standard networks based on the OSI layered architecture were developed and the Mini-MAP network was developed in 1980s to realize a standard communication between various devices from different vendors. Some fieldbuses can also be used for this level.

The area level consists of cells combined into groups. Cells are designed with an application-oriented functionality. By the area level controllers or process operators, the controlling and intervening functions are made such as the setting of production targets, machine startup and shutdown, and emergency activities.

We typically use control-level networks for peer-to-peer networks between controllers such as programmable logic controllers (PLCs), distributed control systems (DCS), and computer systems used for human-machine interface (HMI), historical archiving, and supervisory control. We use control buses to coordinate and synchronize control between production units and manufacturing cells. Typically, ControlNet, PROFIBUS-FMS and (formerly) MAP are used as the industrial networks for controller buses. In addition, we can frequently use Ethernet with TCP/IP as a controller bus to connect upper-level control devices and computers.