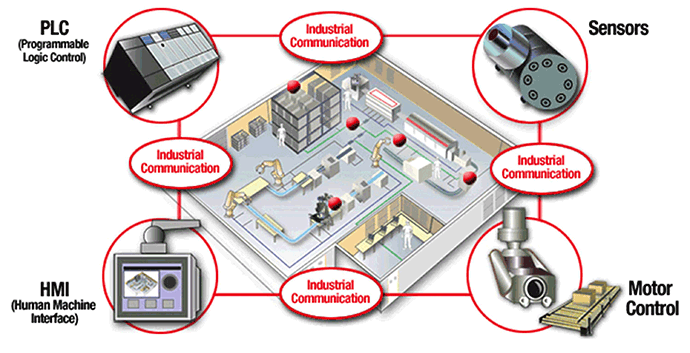 At the beginning of 1960, a digital computer was for the first time really applied as a digital controller. The term direct digital control (DDC) was used to emphasize that the computer directly controls the process. In the 1960s, the application of a minicomputer was still a fairly expensive solution for many control problems. In the meantime, programmable logic controller (PLC) was developed and it replaced the conventional, relay-based controller, having relatively limited control functions. In addition, many technologies were developed for machine tools and discrete production processes. The numerically controlled (NC) machine tool became to be controlled by computers and the robot was developed in this period.

Industrial networks span many manufacturing applications. Standard industrial networks using digital communication technologies cover a wide range of manufacturing applications. In many applications, the types of devices and performance determine the type of network. Contrast the needs of two devices -- a proximity sensor used on a conveyor belt compared to a control valve used in a petroleum refinery. The proximity sensor has a single function - to transmit a Boolean on/off signal indicating the proximity of an object. We can accommodate this signal in a few bits of data. Diagnostic information from the sensor is probably limited to a single "health" indicator, which again requires very little data. However, we can expect the control valve to provide very sophisticated control functions and diagnostics, such as number of cycles since last servicing, packing friction, and ambient operating temperature. These parameters can be extremely critical in an environment such as a refinery -- failures can result in dangerous situations and costly downtime. Clearly, the proximity sensor and the control valve have different network requirements. Therefore, different types of industrial networks must address a variety of different needs. We must select the right network to address our specific application requirements.

What is an Industrial Network? By definition, an industrial network requires geographical distribution of the physical measurement I/O and sensors or functional distribution of applications. Most industrial networks transfer bits of information serially. Serial data transfer has the advantage of requiring only a limited number of wires to exchange data between devices. With fewer wires, we can send information over greater distances. Because industrial networks work with several devices on the same line, it is easier to add a new device to existing systems.

To make all this work, our network must define a set of rules -- a communication protocol -- to determine how information flows on the network of devices, controllers, PCs, and so on. With improved communication protocols, it is now possible to reduce the time needed for the transfer, ensure better data protection, and guarantee time synchronization, and real-time deterministic response in some applications. Industrial networks also ensure that the system sends information reliably without errors and securely between nodes on the network.