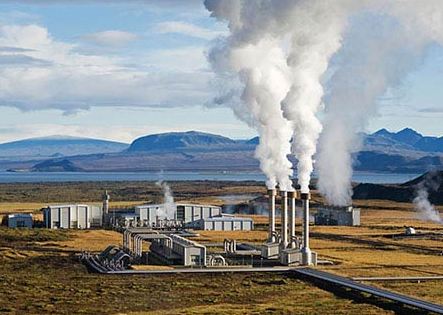 Commercial exploration and development of Plant Geothermal water generated into Electricity to date have focused on natural geothermal reservoirs—volumes of rock at high temperatures (up to 662°F or 350°C) and with both high porosity (pore space, usually filled with water) and high permeability (ability to transmit fluid). The thermal energy is tapped by drilling wells into the reservoirs. The thermal energy in the rock is transferred by conduction to the fluid, which subsequently flows to the well and then to the Earth's surface where it can be converted into Geothermal Electricity.

There are several types of natural geothermal reservoirs. All the reservoirs developed to date for electrical energy are termed hydrothermal convection systems and are characterized by circulation of meteoric (surface) water to depth. The driving force of the convection systems is gravity, effective because of the density difference between cold, downward-moving, recharge water and heated, upward-moving, thermal water. A hydrothermal convection system can be driven either by an underlying young igneous intrusion or by merely deep circulation of water along faults and fractures. Depending on the physical state of the pore fluid, there are two kinds of hydrothermal convection systems: liquid-dominated, in which all the pores and fractures are filled with liquid water that exists at temperatures well above boiling at atmospheric pressure, owing to the pressure of overlying water; and vapor-dominated, in which the larger pores and fractures are filled with steam. Liquid-dominated reservoirs produce either water or a mixture of water and steam, whereas vapor-dominated reservoirs produce only steam, in most cases superheated.

Although geothermal energy is present everywhere beneath the Earth's surface, its use is possible only when certain conditions are met: (1) The energy must be accessible to drilling, usually at depths of less than 2 mi (3 km) but possibly at depths of 4mi (6–7km) in particularly favorable environments (such as in the northern Gulf of Mexico Basin of the United States). (2) Pending demonstration of the technology and economics for fracturing and producing energy from rock of low permeability, the reservoir porosity and permeability must be sufficiently high to allow production of large quantities of thermal water. (3) Since a major cost in geothermal development is drilling and since costs per meter increase with increasing depth, the shallower the concentration of geothermal energy the better. (4) Geothermal fluids can be transported economically by pipeline on the Earth's surface only a few tens of kilometers, and thus any generating or direct-use facility must be located at or near the geothermal anomaly.

The use of geothermal energy for Geothermal Electricity has become widespread because of several factors. Countries where geothermal resources are prevalent have desired to develop their own resources in contrast to importing fuel for power generation. In countries where many resource alternatives are available for power generation, including geothermal, geothermal has been a preferred resource because it cannot be transported for sale, and the use of geothermal energy enables fossil fuels to be used for higher and better purposes than power generation. Also, geothermal steam has become an attractive power generation alternative because of environmental benefits and because the unit sizes are small (normally less than 100 MW). Moreover, geothermal plants can be built much more rapidly than plants using fossil fuel and nuclear resources, which, for economic purposes, have to be very large in size. Electrical utility systems are also more reliable if their power sources are not concentrated in a small number of large units.