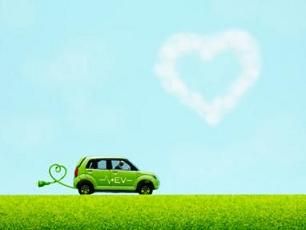 Your first option is battery-electric vehicles (BEVs), which powered by motors that draw electricity from on-board storage batteries. These batteries act as an engine to propel the motor. Using electric vehicles presents a great potential to reduce greenhouse gas (GHG) emissions and smog-forming pollutants because pollution isn't produced from the tailpipe or through fuel evaporation. The vehicles can also have low overall (life-cycle) GHG emissions depending on the electricity source used to recharge the batteries. This option would require you to say goodbye to your conventional vehicle.

If you don't necessarily want to give up your conventional vehicle, but still want the environmental and energy benefits of electric vehicles, then hybrid electric vehicles (HEVs) are your best option. HEVs are made up of a battery powered electric motor with combined with a conventional internal combustion engine. Instead of paying outrageous gas prices every time your gas tank nears the empty mark, a rapid refueling option recharges your conventional vehicle. If this alternative energy fuel option appeals to you then you'll be glad to know that many hybrid vehicle models are already widely available on the market, with many more manufacturers planning on introducing new hybrid electric/gasoline vehicles in the next few years.

If you are using a portable or a stationary power device, then fuel cells might be the ideal option for you. Electricity is generated in fuel cells electrochemically when hydrogen and oxygen are combined. Fuel Cells can produce zero or very low emissions depending on the source of the hydrogen. These energy-conversion devices can also utilize hydrogen and other fuels and, in the future, might be used for transportation applications. This alternative energy fuel source is also an option for vehicles and prototypes for hydrogen fuel cell vehicles that are currently in the works. But, unfortunately, barriers exist. A lack of a hydrogen distribution infrastructure has made it difficult for this alternative energy fuel source to move ahead. Also, costs are high for fuel cells and hydrogen-production technologies and there are challenges related to hydrogen storage. However, fuel cells are a viable energy technology that can offer significant environmental, supply, economic and energy efficiency benefits because of the variety of fuels available for conversion to hydrogen.

Conventional diesel combustion harms the environment, but biodiesel combusts better with a higher cetane rating that produces fewer life cycle greenhouse gas emissions (GHG). This alternative energy fuel source is a non-toxic and biodegradable fuel that comes from vegetable oils, animal fats, waste cooking oil, or tall oil (a by-product from pulp and paper processing). Biodiesel is made from these feedstocks through transesterification, a process that reacts the oil with an alcohol (methanol is usually used, but so can ethanol) and a catalyst (eg. sodium hydroxide). Glycerine, an ester called biodiesel, is produced from this chemical reaction. Most biodiesel is generated using this method.