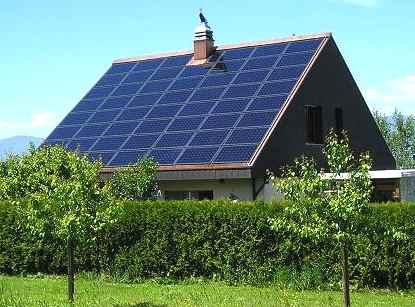 Alternative energy developments represent a transformational opportunity to not only attract new global investment and create new jobs, but to reduce the world's reliance on fossil fuels. And, the future looks bright because experts predict that completed alternative energy developments will add 4.5 trillion dollars in value to the economy by 2030.

Alternative Energy Development - Wind Energy
Wind energy, as an alternative energy development, is the world’s fastest-growing energy source. In fact, 42 per cent of all new power plants installed in 2008 are powered by the wind. In January 2002, installed world capacity exceeded 24,000 megawatts, of which 205 megawatts (or 0.85 per cent of world capacity) was located in Canada. Over the past decade the cost of wind energy has fallen from 30 cents per-kilowatt-hour to around eight cents per-kilowatt-hour. In major policy reviews, the U.S. Department of Energy and the British government have predicted future wind energy costs of between 3.4 to 5.5 cents per-kilowatt-hour by 2020. A recent assessment of wind’s prospects and impacts released by the U.S. Department of Energy concluded that the United States could supply 20 per cent of the nation’s electricity needs through wind by 2030. This assessment and related analyses found achieving this goal would:

Alternative Energy Development - Solar Energy
Photovoltaic (PV) technology has become a focal point in solar alternative energy development due to a number of social and economic factors, including the need to reduce greenhouse gas (GHG) emissions, deregulation, and the restructuring of electric power generating companies. PV cells convert sunlight directly into electricity via the photovoltaic effect using specially treated semiconductor materials. Over the past 30 years crystalline silicon has been the material of choice in PV panels Solar PV systems represent a 42-million-dollar industry in Canada, with sales increasing, on average, more than 20 per cent annually over the past decade. In 2000, 1.5 megawatts of modules were sold in Canada, with 98 per cent of this total being used in off-grid or remote applications, and two per cent grid-tied. Based on annual 20 per cent growth rates, the production price of electricity from photovoltaics in Canada can be expected to drop below that of conventional thermal sources by 2020. Each installed kilowatt of PV power has the potential to offset 1.6 tonnes of CO2 per year when replacing coal-generated electricity, 1.3 tonnes per year when replacing oil and 0.7 tonnes per year when replacing natural gas.

Alternative Energy Development - Biomass Energy
Biomass, as an alternative energy development, is increasingly seen as a competitive and sustainable energy source. Almost six per cent of primary energy demand is currently supplied by biomass energy (mostly used by the pulp and paper industries, who burn their own residues to turn steam into electricity). The remainder is mostly cordwood, used for residential heating. At the moment, most biomass combustion alternative energy development is concentrated on small-scale cogeneration systems to utilize industrial waste, of around one-megawatt output. Various recent studies have confirmed that extensive biomass resources remain under-utilized across Canada. This includes over five million bone-dry tonnes of lumber and sawmill plant residues, which are being incinerated or landfilled without heat recovery.

Alternative Energy Development - Geothermal Energy
Approximately 35,000 Canadian homes and buildings currently receive heating and cooling through geo-exchange installations. However, policy obstacles still exist which prevent extensive alternative energy development of Western Canada’s high-temperature geothermal resources for electrical generation. The cumulative geothermal resource remains poorly quantified due to a 25 year hiatus in government funding of geothermal science. Through commercial avenues, approximately 100 megawatts of geothermal power potential has been identified as of 2009, although there is still no geothermal power in Canada’s electrical grid. As an under-explored geothermal resource, geothermal projects will represent a pertinent frontier for commercial development in the near future. The corporate and public awareness of geothermal technologies has grown in the recent past through an increased media focus, and a strengthening support for carbon-friendly lifestyle choices. Currently, the Canadian Geothermal Energy Association is leading 33 government policy projects to establish a foundation for the imminent development of geothermal electrical projects. As the effect of recent carbon taxes continues to saturate electricity markets, new geothermal opportunities will be available to fill the void with reliable and clean alternative energy.

Alternative Energy Development - Tidal Energy
Tidal energy is an alternative energy development that is extracted directly as kinetic energy from a moving stream, whereby seawater is ‘partially impounded’ in its flow through a channel. Local effects on the tidal regime are considered low or negligible, depending on the technology used to extract energy. Tidal current energy is predictable and regular, and will be unaffected by global climate change. Nevertheless the technology for exploiting this resource is still in its infancy, and there are, as yet, no commercial installations anywhere in the world. Tidal current power development is estimated to be one to three years behind ocean wave energy and five to eight years behind wind energy.

Alternative Energy Development - Wave Energy
Ocean wave technology, as an alternative energy development, extracts kinetic energy from the up-and-down motion of waves, using it to generate electricity. Inventors have taken out hundreds of patents for wave energy devices over the years, but concentrated effort in this direction dates from the 1970s oil crisis. The first wave power plants were built near Bergen, in Norway, in the mid-80s. Together, both plants had a combined capacity of 850 kilowatts. The first wave energy plant that was used for commercial purposes was brought online in Islay, Scotland, in November 2000. Today, India, Japan, Australia, Indonesia, Australia, and countries of the European Union have undertaken numerous government-supported projects. BC Hydro, an electrical utility in the Canadian province of British Columbia, has committed to implementing three to four megawatts of ocean wave generating capacity as part of the Vancouver Island Green Energy Demonstration project. In order to develop wave power towards its potential, extensive data collection is needed to pinpoint prime sites. Further research is also needed to assess the impact of heavy storms on installed equipment.