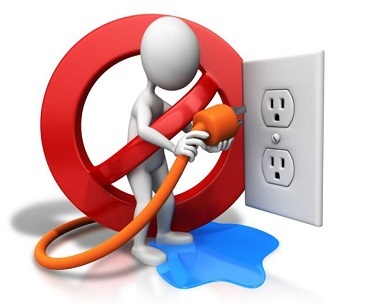 Electricity Safety dangers involving voltages of greater than 50V are capable of producing heart fibrillation if they produce electric currents in body tissues which happen to pass through the chest area. The electrocution danger is mostly determined by the low conductivity of dry human skin. If skin is wet, or if there are wounds, or if the voltage is applied to electrodes which penetrate the skin, then even voltage sources below 40 V can be lethal if contacted. A DC circuit may be especially dangerous because it will cause muscles to lock around the wire.

Accidental contact with high voltage will usually result in severe injury or death. This can occur as a person's body provides a path for current flow causing tissue damage and heart failure. Other injuries can include burns from the arc generated by the accidental contact. These can be especially dangerous if the victims airways are affected. Injuries may also be suffered as a result of the physical forces exerted as people may fall fall from height or be thrown considerable distance.

Depending on the short circuit current available at a switchgear line-up, a hazard is presented to maintenance and operating personnel due to the possibility of a high-intensity electric arc. Maximum temperature of an arc can exceed 10,000 kelvin, and the radiant heat, expanding hot air, and explosive vaporization of metal and insulation material can cause severe injury to unprotected workers. Such switchgear line-ups and high-energy arc sources are commonly present in electric power utility substations and generating stations and power lines, industrial plants and large commercial buildings. In the United States the National Fire Protection Association, has published a guideline standard NFPA 70E for evaluating and calculating arc flash hazard, and provides standards for the protective clothing required for electrical workers exposed to such hazards in the workplace. And even then, workers must still be careful.

Even voltages insufficient to break down air can be associated with enough energy to ignite atmospheres containing flammable gases or vapours, or suspended dust. For example, air containing hydrogen gas or natural gas or gasoline vapor can be ignited by sparks produced by electrical apparatus fed by electricity lines or electricity power lines. Examples of industrial facilities with hazardous areas are petrochemical refineries, chemical plants, grain elevators, and some kinds of coal mines.

Measures taken to prevent such explosions include:

In recent years standards for explosion hazard protection have become more uniform between European and North American practice. The "zone" system of classification is now used in modified form in U.S. National Electrical Code and in the Canadian electrical code. Intrinsic safety apparatus is now approved for use in North American applications, though the explosion-proof enclosures used in North America are still uncommon in Europe.

The Electric Safety Home is a home in which the outlet plugs, electric cords, and each electricity plug and cord plug near sinks and water sources are GFCI protected. That makes them safe.