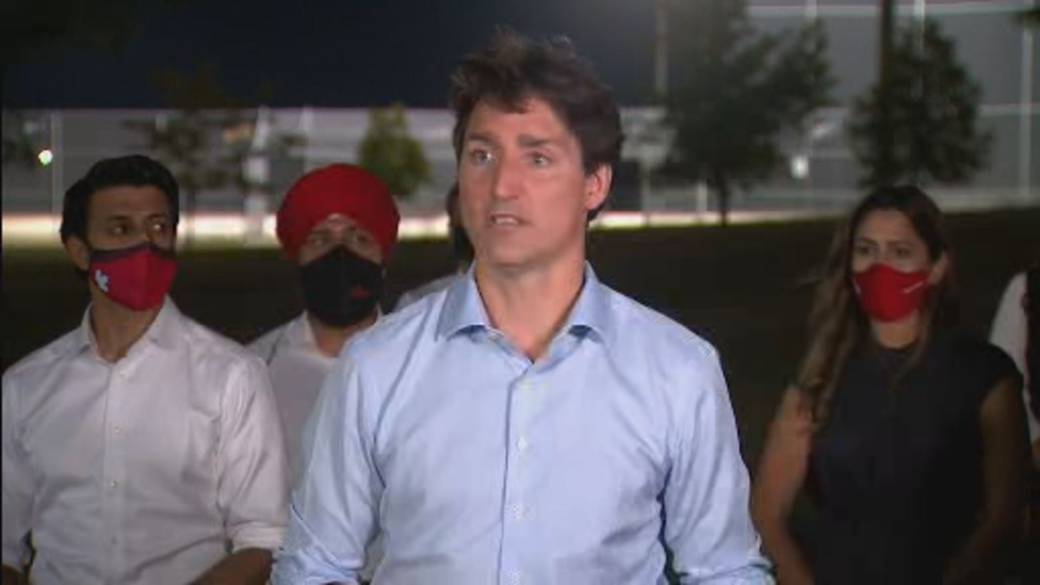 TORONTO - Liberal Leader Justin Trudeau vowed to regulate total emissions from Canada’s oil and gas producers as he laid out his first major climate change promises of the campaign Sunday, a plan that was welcomed by several environmental and climate organizations.

Trudeau said that if re-elected, the Liberals will set out regulated five-year targets for emissions from oil and gas production to get them to net-zero emissions by 2050, but also create a $2 billion fund to create jobs in oil and gas-reliant communities in Alberta, Saskatchewan and Newfoundland and Labrador.

“Let’s be realistic, over a quarter of Canada’s emissions come from our oil and gas sector. We need the leadership of these industries to decarbonize our country,” Trudeau said.

“That’s why we’ll make sure oil and gas emissions don’t increase and instead go down with achievable milestones,” while ensuring local economies can prosper.“

The Liberals are also introducing an interim electric vehicle mandate, which will require half the cars sold in Canada to be zero-emission by 2030, ahead of the final mandated target of 100 per cent by 2035.

Trudeau spoke in Cambridge, Ont., where protesters once again made an appearance amid a visible police presence. Officers carried one woman off the property when she refused to leave when asked.

Trudeau alluded to the protesters and their actions, which included sounding sirens and chanting expletives, as he defended his government’s record on climate change and touted its new plan.

“Sirens in the background may remind us that this is a climate emergency. That’s why we will move faster and be bolder,” he said.

The new timeline for electric vehicles also “sends a clear signal to auto companies to get cracking (and build them here),” he said on Twitter. “We’d like to see this happen faster but the shift away from voluntary targets to requirements is big.”

Merran Smith, executive director of Clean Energy Canada, a climate program at Simon Fraser University, said clean electricity, clean transportation and “phasing out oil and gas with accountable milestones” must be key priorities over the next decade.

“Today’s announcement, which checks all of these boxes, is not just good ambition_it’s good policy. Policy that will drive down carbon pollution and drive up clean job growth and economic competitiveness. It is policy that will drive Canada forward with cleaner cars, power Canada with clean electricity, and invest in businesses that will last such as battery manufacturing, electric vehicle manufacturing and low carbon steel,” Smith said in an email.

He said the organization prefers market incentives such as carbon pricing, that spur innovation over further regulation. But since the largest oilsands companies have already committed to reaching net-zero emissions, he said the newly unveiled policy could provide some support.

“ First, I would encourage the Liberal Party to release independent modelling showing the types of emissions reductions they expect to achieve with their new package of policies. Second, many policies are referred to in general terms so I hope the Liberal Party will provide further details in the coming days,” he said.

“Finally, the document does not specifically mention carbon capture or carbon dioxide removal technologies but both technologies will be critical to achieve some of the pledges in today’s announcement, especially reaching net-zero emissions in the oil a gas sector.”

NDP Leader Jagmeet Singh painted the announcement as the latest in a string of “empty promises” from the Liberals on climate change, saying Canada has the highest increase in greenhouse gas emissions among all G7 countries.

“Climate targets mean nothing when you don’t act on them. We can’t afford more of Justin Trudeau’s empty words on climate change,” he said in a statement.

The Trudeau Liberals submitted new targets to the United Nations in July, promising that Canada will curb emissions by 40 to 45 per cent from 2005 levels by 2030.