Ottawa sets out to protect its hydro heritage 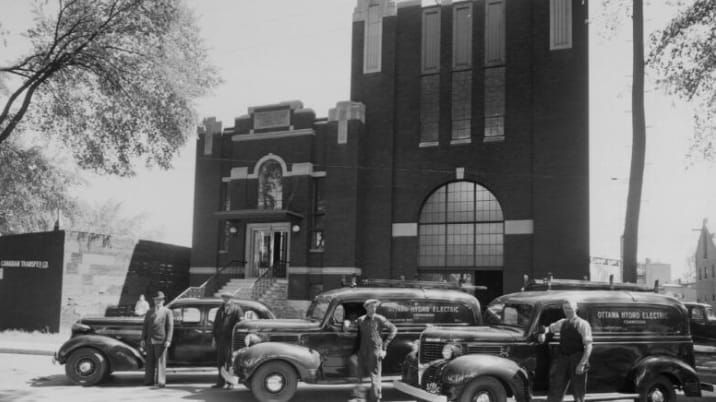 5 Hydro Ottawa substations to be given heritage designation

OTTAWA - The city of Ottawa is looking to designate five hydro substations built nearly a century ago as heritage structures, a move intended to protect the architectural history of Ottawa's earliest forays into the electricity business.

All five buildings are still used by Hydro Ottawa to reduce the voltage coming from transmission lines before the electricity is transmitted to homes and businesses.

In 1905, city council held a special meeting to buy the electrical company, which led to a dramatic drop in electricity rates for residents.

The substations are now owned by Hydro Ottawa, which agreed to the heritage designations on the condition it not be prevented from emergency demolitions if it needs to "preserve public safety and the continuity of critical hydro electrical services."

Built in 1922, the substation at the intersection of Glebe and Bronson avenues was the first to be built by the new municipal electrical department.

The largest of the substations being protected dates back to 1929 and is found at the corner of Carling Avenue and Merivale Road. It was built to accommodate a growing population in areas west of downtown including Hintonburg and Mechanicsville.

The substation on Holland Avenue near the Queensway is different from the others because it was built in 1924 to serve the Ottawa Electric Railway Company. The streetcar company operated from 1891 to 1959.

This substation on King Edward Avenue was built in 1931 and designed by architect William Beattie, who also designed York Street Public School in Lowertown and the substation on Carling Avenue.

The last substation to be built in a 'bold and decorative style' is at 39 Riverdale Ave. in Old Ottawa South, according to city staff. It was designed in an Art Deco style by prominent architect J. Albert Ewart, who was also behind the Civic Hospital and nearby Southminster Church on Bank Street.