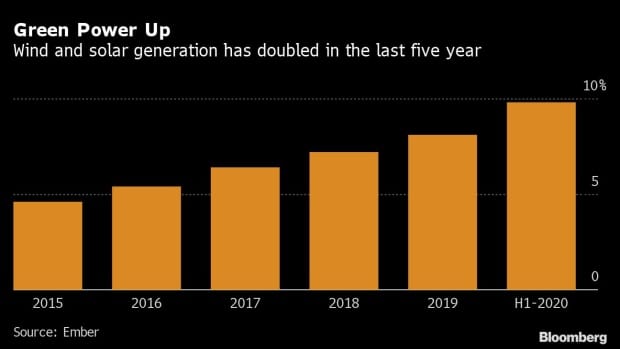 LONDON - Wind and solar energy doubled its share of the global power mix over the last five years, moving the world closer to a path that would limit the worst effects of global warming.

The sources of renewable energy made up nearly 10% of power in most parts of the world in the first half of this year, according to analysis from U.K. environmental group Ember.

That decarbonization of the power grid was boosted this year as shutdowns to contain the coronavirus reduced demand overall, leaving renewables to pick up the slack.

Ember analyzed generation in 48 countries that represent 83% of global electricity. The data showed wind and solar power increased 14% in the first half of 2020 compared with the same period last year while global demand fell 3% because of the impact of the coronavirus.

At the same time that wind turbines and solar panels have proliferated, coal’s share of the mix has fallen around the world. In some, mainly western European countries, coal has been all but eliminated from electricity generation.

China relied on the dirtiest fossil fuel for 68% of its power five years ago. That share dipped to 62% this year and renewables made up 10% of all electricity generated.

Still, the growth of renewables may not be going fast enough for the world to hit its climate goals and coal is still being burnt for power in many parts of the world.

Coal use needs to fall by about 79% by 2030 from last year’s levels - a fall of 13% every year throughout the decade to come, Ember said.

New installations of wind farms are set to hold more or less steady in the next five years, according to data from BloombergNEF. That will make it difficult to realize a sustained pace of doubling renewable power every five years.

“If your expectations are that we need to be on target for 1.5 degrees, clearly we’re not going fast enough,” said Dave Jones, an analyst at Ember. “We’re not on a trajectory where we’re reducing coal emissions fast enough.”