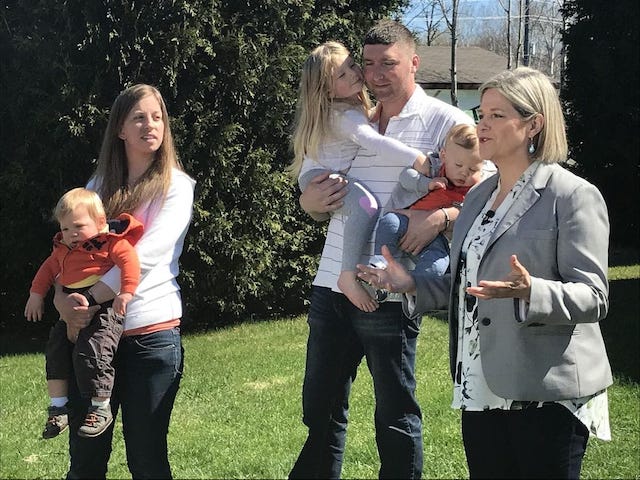 Ontario NDP leader Andrea Horwath says her party’s hydro plan will reduce families’ electricity bills and the NDP is the only choice to get Hydro One back in public hands.

Howarth outlined the plan Saturday morning outside the home of a young family who say they struggle with their electricity bills — in particular over the extra laundry they now have after the birth of their twin boys.

An NDP government would end time-of-use pricing, which charges higher rates during peak times and lower rates after hours, “so that people aren’t punished for cooking dinner at dinner time,” Horwath said at a later campaign stop in Orillia, “so people can live normal lives and still afford their hydro bill.”

An NDP government would end time-of-use pricing, which gives lower rates for off-peak usage, Howarth said. The change would mean families wouldn't be "forced to wait until night when the pricing is lower to do laundry," and wouldn't have to rearrange their lives around chores.

The pricing scheme was supposed to lower prices and help smooth out demand for electricity, especially during peak times, but has failed, she said.

In order to lower hydro bills, Horwath said an NDP government would buy back shares of Hydro One sold off under the Wynne government, which she said has led to high prices and exorbitant salaries among executives. The NDP plan would also make sure rural families do not pay more in delivery fees than city dwellers, and curb the oversupply of energy to bring prices down.

Critics have said the NDP plan is too costly and will take a long time to implement.

"The NDP's plan to buy back Hydro One and continue moving forward with a carbon tax will cost taxpayers billions," said Melissa Lantsman, a spokesperson for PC Leader Doug Ford.

"Only Doug Ford has a plan to reduce hydro rates and put money back in people's pockets. We'll reduce your hydro bill by 12 per cent."

Ford has said he will fire Hydro One CEO Mayo Schmidt, and has dubbed him the $6-million-dollar man.

Horwath has said both Ford and Liberal Leader Kathleen Wynne will end up costing Ontarians more in electricity if one of them is elected come June 7. Their "hydro scheme is the wrong plan," she said.