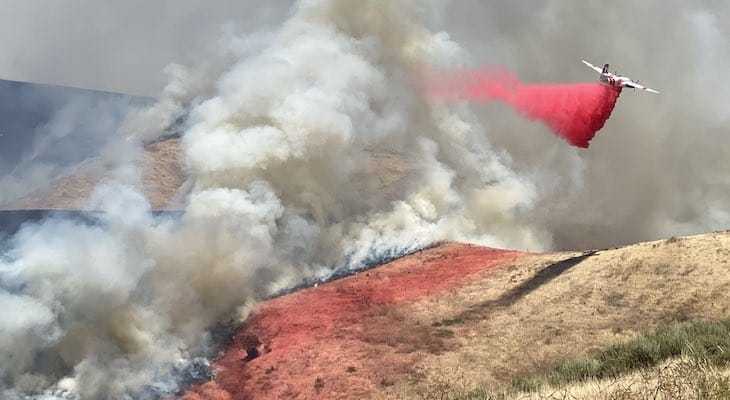 LOS ANGELES - A downed Pacific Gas and Electric Co. power line was the cause of the Drum fire that broke out June 14 on Drum Canyon Road northwest of Buellton, the Santa Barbara County Fire Department announced Thursday.

The fire broke out about 12:50 p.m. north of Highway 246 and burned about 696 acres of wildland before firefighters brought it under control, although no structures were damaged, according to an incident summary.

A team of investigators pinpointed the official cause as a power line that failed between two utility poles and fell to the ground, where arcing electricity ignited the surrounding vegetation, said County Fire Department spokesman Capt. Daniel Bertucelli.

In response, a PG&E spokesman said the utility is conducting its own investigation and does not have access to whatever data investigators used, but he noted the company filed an electric incident report on the wire with the California Public Utilities Commission on June 14.

"We are grateful to the first responders who fought the 2020 Drum fire in Santa Barbara County and helped make sure that there were no injuries or fatalities and no reports of structures damaged or burned," PG&E spokesman Mark Mesesan said.

"While we are continuing to conduct our own investigation into the events that led to the Drum fire, PG&E does not have access to the Santa Barbara County Fire Department's report."

He said PG&E remains focused on reducing wildfire risk across its service area while limiting the scope and duration of public safety power shutoffs and that the safety of customers and communities it serves are its most important responsibility.