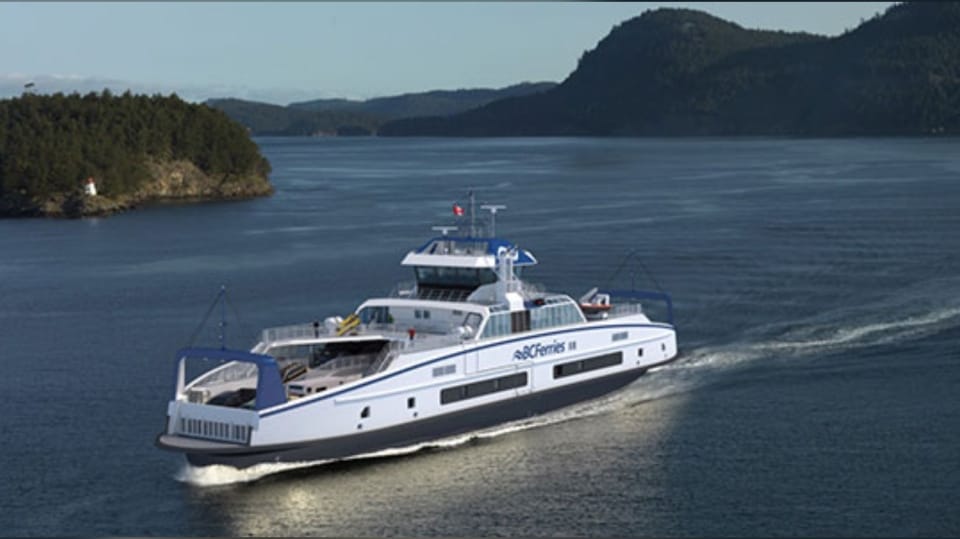 VICTORIA - In a champagne celebration, BC Ferries welcomed two new, hybrid vessels into its fleet Wednesday. The ships arrived in Victoria last month, and are expected to be in service on northern routes by the summer.

The Island Aurora and Island Discovery have the ability to run on either diesel or electricity.

"The pressure on whales on the West Coast is very intense right now," said BC Ferries CEO Mark Collins. "Quiet operation is very important. These ships will be gliding out of the harbor quietly and electrically with no engines running, that will be really great for marine space."

BC Ferries says the ships will be running on electricity 20 per cent of the time when they enter service, but the company hopes they can run on electricity full-time in the future. That would require the installation of shoreline power, which the company hopes to have in place in the next five to 10 years. Each ship costs around $40-million, a price tag that the federal government partially subsidized.

When the two ships begin running on the Powell River to Texada, and Port McNeill, Alert Bay, and Sointula routes, two older vessels will be retired.

"They are replacing a 47-car ferry, but on some routes they will be replacing a 25-car ferry, so those routes will see a considerable increase in service," said Collins.

Although the ships will not be servicing Colwood, the municipality's mayor is hoping that one day, they will.

"We can look at an electric ferry when we look at a West Shore ferry that would move Colwood residents to Victoria," said Mayor Rob Martin. "Here is a great example of what BC Ferries can do for us."

BC Ferries says it will be adding four more hybrid ships to its fleet by 2022, and is working on adding hybrid ships that could run from Victoria to Tsawwassen.

B.C’s first hybrid-electric ferries arrived in Victoria on Saturday morning ushering in a new era of travel for BC Ferries passengers.

“It’s a really exciting day for us,” said Tessa Humphries, spokesperson for BC Ferries.

It took the ferries 60 days to arrive at the Breakwater District at Ogden Point. They came all the way from Constanta, Romania.

“These are battery-equipped ships that are designed for fully electric operation; they are outfitted with hybrid technology that bridges the gap until the shore-charging infrastructure and funding is available in British Columbia,” said Humphries.

The two new "Island Class" vessels arrived at about 9 a.m. to a handful of people eagerly wanting to witness history.

Sometime in the next few days, the transport ship that brought the new ferries to B.C. will go out into the harbor and partially submerge to allow them to be offloaded, Humphries said.

The transfer process could happen in four to five days from now. After the final preparations are finished at the Breakwater District, the ships will be re-commissioned in Point Hope Maritime and then BC Ferries will officially take ownership.

“We know a lot of people are interested in this so we will put out advisory once we have more information as to a viewing area to see the whole process,” said Humphries.

Both Island Class ferries can carry 300 passengers and 47 vehicles. They won’t be sailing until later this year, but Humphries tells CTV News they will be named by the end of February.