In 2019, electric power production from utility-scale generators in the United States was about 4.1 trillion kilowatthours (kWh). EIA estimates that an additional 35 billion kWh (or about 0.04 trillion kWh) were from small-scale solar photovoltaic (PV) systems, most of which was direct use.

In 2019, about 63% of U.S. utility-scale power was produced from fossil fuels (coal, natural gas, and petroleum), about 20% was from nuclear energy, and about 17% was from renewable energy sources.

Hydro electric power generation units use flowing water to spin a turbine connected to a generator. In a falling water system, water is accumulated in reservoirs created by dams, then released through conduits to apply pressure against the turbine blades to drive the generator. In a run-of-the-river system, the force of the river current applies the pressure to the turbine blades to produce electricity. In 2000, hydroelectric generation had the fourth largest share (7 per cent) of electricity production at 273 billion kWh..

The share of electrical energy production in the United States from different sources has arguably changed more rapidly since 2007 than at any time since 1950. Canada's electricity generation (mostly in Ontario and British Columbia) is much less than the USA. At least three trends are catalyzing these changes: (1) the low price of natural gas; (2) the rise in renewable and distributed generation due to falling costs; and (3) recent Federal and State policies impacting generation. Understanding these trends and phenomena in the context of the history of generation, potential for additional generation, constraints, and comparative characteristics that drive generation investment is essential to identifying policies and measures that will facilitate the development of a generation fleet that meets U.S. objectives for the 21st century. These objectives include reliability, resiliency, affordability, cleanliness, and climate goals as articulated by various stakeholders including business as well as state and local governments.

Diversity is a key attribute in U.S. and Canadian electricity production. Rather than being the result of a deliberative, long-term national initiative, this diversity has developed through growth spurts of specific generation technologies at different times. This is often due to a confluence of policies, historic events, capital cost, fuel cost, and technological advancements.

The national generation mix has transitioned over the past few decades, and continuing significant changes are projected. The U.S. generation fleet is transitioning from one dominated by centralized generators with high inertia and dispatchability to one that is more hybridized, relying on a mixture of traditional, centralized generation and variable utility-scale and distributed renewable energy generation. 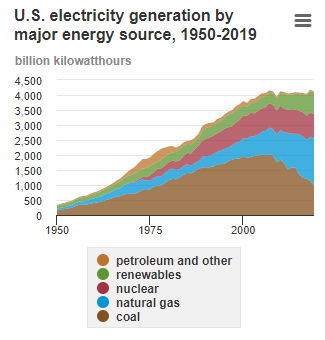 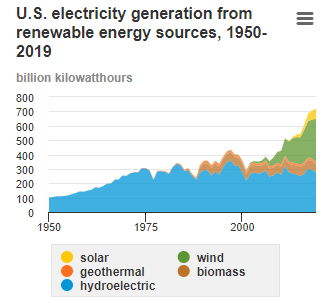 What Is Electricity Generation?

A "generator" and "motor" are essentially the same thing: what you call it depends on whether electricity is going into the unit or coming out of it.

A generator produces electricity. In a generator, something causes the shaft and armature to spin. An electric current is generated, as shown in the picture (lighting bolt).

Lots of things can be used to make a shaft spin - a pinwheel, a crank, a bicycle, a water wheel, a diesel engine, or even a jet engine. They're different sizes but it's the same general idea. It doesn't matter what's used to spin the shaft - the electricity that's produced is the same.

A motor uses electricity. In a motor, the electricity comes in through wires attached to the positive (+) and negative (-) terminals. The electric current causes the armature and shaft to spin. If there's just a little current and it's a small motor, it won't do very much work (i.e. it can only spin a small fan). If it's a large motor and it's using a lot of electricity, it can do a lot of work (i.e. spin a large fan very fast; lift a very heavy load; or whatever the motor is being used for).

A commercial utility electric generator -- for example, a 180-megawatt generator at the Hawaiian Electric Company's Kahe power plant on Oahu -- can be quite large. It is 20 feet in diameter, 50 feet long, and weighs over 50 tons. The copper coils (called the "armature") spin at 3600 revolutions per minute. Although the principle is simple (copper wire and magnets), it's not necessarily easy!

So where do all the different fuels come in? It's all a question of how to get (and keep) the system moving (i.e. how to keep the copper wire spinning around).

In a steam power plant, fuels (such as petroleum, coal, or biomass) are burned to heat water which turns into steam, which goes through a turbine, which spins...turning the copper wire (armature) inside the generator and generating an electric current.

A geothermal power plant is pretty much a steam power plant, since what comes out of the earth is steam. Rainwater soaks into the ground and goes down, down, down...far enough until it reaches a region which is really hot (in Hawaii, that's about 6000 feet). A well is drilled, the steam comes out, goes through a heat exchanger, and spins a turbine... turning the copper wire (armature) inside the generator and generating an electric current. By the time the steam has gone through the heat exchanger, it has cooled off and become warm water. It is then re-injected into the ground.

In a gas turbine power plant, fuels are burned to create hot gases which go through a turbine, which spins...turning the copper armature inside the generator and generating an electric current.

In a nuclear power plant, nuclear reactions create heat to heat water, which turns into steam, which goes through a turbine, which spins...turning the copper armature inside the generator and generating an electric current.

In a wind turbine, the wind pushes against the turbine blades, causing the rotor to spin...turning the copper armature inside the generator and generating an electric current.

In a hydroelectric turbine, flowing (or falling) water pushes against the turbine blades, causing the rotor to spin (kinetic energy transfer)...turning the copper armature inside the generator and generating an electric current.

Consumers expect electricity to be available whenever they plug in an appliance, turn a switch, or open a refrigerator. Satisfying these instantaneous demands requires an uninterrupted flow of electricity. In order to meet this requirement, utilities and nonutility electricity power producers operate several types of electric generating units, powered by a wide range of fuel sources. These include fossil fuels (coal, natural gas, and petroleum), uranium, and renewable fuels (water, geothermal, wind, and other renewable energy sources like solar photovoltaics).

Steam-electric generating units burn fossil fuels, such as coal, natural gas, and petroleum. The steam turns a turbine that produces electricity through an electrical generator. Natural gas and petroleum are also burned in gas turbine generators where the hot gases produced from combustion are used to turn the turbine, which, and in turn, spins the generator to produce electricity. Additionally, petroleum is burned in generating units with internal-combustion engines. The combustion occurs inside cylinders of the engine, which is connected to the shaft of the generator. The mechanical energy provided from the engine drives the generator to produce energy.