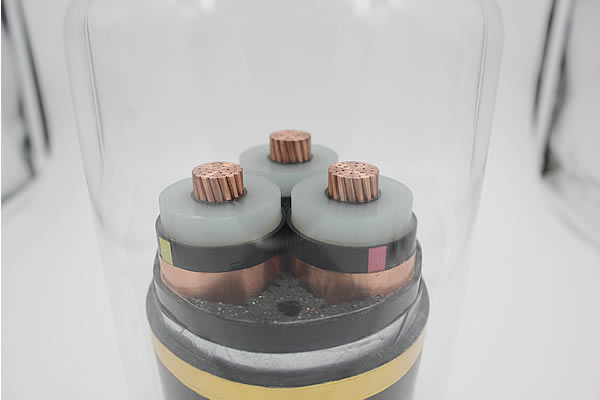 The most frequent installations for these cables are between generating and distribution systems such as, for example, between substations, for the main transmission of electrical power. The underground transmission system supplies electricity to the underground distribution network, which feeds industrial plants, office buildings, street lighting, residences, and so forth. Distribution and installation cables are covered in detail in Copper Medium-Voltage Power Cables and Copper Wire and Cable in Buildings.

In the field of underground wiring, by the time that the polyphase AC system was conceived in 1886, several major steps had been taken towards making possible a practical underground power transmission system. One was Borel’s invention of an efficient lead press in 1879, and another was MacCracken’s concept of helically applied paper insulating tapes in 1884. Finally, in 1890, Vincent de Ferranti produced his famous 10,000-volt concentric cable, which was installed in London, England.

Continuous progress in the development of underground power transmission has taken place since that time. The first 3- conductor 25 kV cables were installed in Montreal in 1902, and they operated successfully for over 50 years. Then, in 1917, Emanueli conceived a design for hollow-core oil-filled cables, a breakthrough which permitted eventual transmission of power at high and extra-high voltages.

Gradually, the voltage levels of underground power cables increased, to 66 kV in 1926 in Montreal and Philadelphia, 220 kV in 1936 in Paris, and in recent years, reaching 525 kV in Canada and 535 kV in the United States. Current technology permits underground transmission cable systems as high as 1,100 kV.

The power requirements for the electrical services in our cities, towns and rural areas are produced by hydro, nuclear and fossil-fuel generating plants. Many of these generating plants are located at considerable distances from the places of electrical consumption. Over long rural distances, overhead lines are used for electrical transmission. However, when a built-up area is approached, or if the power plant is in proximity to a city or town, there are many advantages to be gained by installing underground cables for the transmission system.

Apart from the obvious aesthetic advantages of improved appearance and maintaining property values, underground cable transmission systems have many advantages over overhead lines.

Copper has the highest electrical conductivity of the commercial metals, except silver. The electrical conductivity of annealed copper at 20°C (68°F) is the standard to which all other metals and alloys are compared. It is arbitrarily established at 100% IACS (International Annealed Copper Standard) and corresponds to a resistance of 1.7241 microhm-cm. Another manner of stating the standard of resistance is 0.15328 ohm-gram/metre2, which is the ohmic resistance of a wire, 1 metre long, weighing 1 gram. In the fully annealed condition, modern high conductivity copper frequently has a conductivity of 101% IACS, or even 102%, but heavy cold working can reduce this to slightly below 100%.

The high electrical conductivity of copper is not the only reason for it being the preferred cable material. Equally as important are its accompanying properties, including strength, formability, ease of joining, resistance to creep, high thermal conductivity, and resistance to corrosion.

As with all other pure metals, the electrical conductivity varies with temperature. If a metal becomes overheated from inadvertent electrical overload, then its conductivity is reduced, which aggravates the temperature situation. Copper is well known for its excellent performance under such adverse circumstances.

In summary, the important advantages of copper installations are the low maintenance that may be anticipated, high performance and reliability.