Keeping the Lineman and His Work Site Safe

By By Claire Swedberg 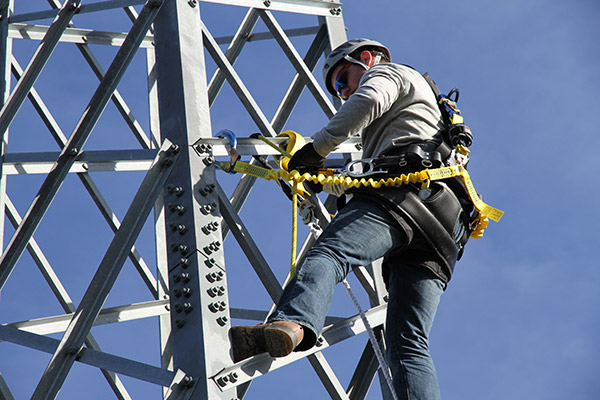 Line-construction contractors can do their best to train the management, offer safety training and equipment and trust the foremen who are appointed to a job, but it is an inherently dangerous business. Despite all the safeguards, some new linemen say this is what some foremen tell them about safety procedures: “That’s the way you may have learned it in training, but this is how it’s done on the job ...”

Training is designed to keep linemen safe. But is that training and equipment being put to proper use? The answer varies depending on the job and the foreman—more so than the company—according to linemen who have described the situation. Often even one company can be employing a variety of foremen with a variety of dedication to safety.

Contractors often find there are a lot of shortcuts being taken. Safety can vary widely within one company, especially if a foreman “develops” his own rules, perhaps to put productivity ahead of everything else.

Linemen learn the fundamentals in school, but training does not necessarily extend to the job site. Most contractors are highly committed to safety. They know that not only is it disastrous to have an injury or fatality because of lax safety, it is also financially calamitous.

The calculated risks that save lineworkers a few minutes on the job can quickly become a habit. For example, workers may fail to cover up equipment over energized lines or shore trench excavation to avoid cave-ins.

The problem is persistent enough that NECA, IBEW and OSHA are seeking improvements. NECA has teamed up with IBEW, the Edison Electric Institute and some large line construction firms, to create the Transmission and Distribution Strategic Partnership to help improve lineman and foreman safety.

“It’s a fact of life that a lot of linemen work on live wires and equipment energized at tens of thousands of volts,” said Brooke Stauffer, NECA’s executive director of standards and safety and a leader in the partnership. He added that utility customers are rarely willing to shut down power for repairs. “The main problem is the giant feeders,” Stauffer said. “You can’t shut off a whole city.”

Despite these realities, as well as the need to get jobs done quickly, Stauffer said there are safe ways to work productively. “Effective supervision is important.”

Some contractors are in better position than others to regulate those jobs. L.E. Meyers, for instance, has a safety web of auditors and managers who evaluate each job.

“I don’t find it to be a problem,” said Todd Cooper, an L.E. Meyers regional manager. Their foremen, he said, generally have stayed with the company many years and are well trained and reliable. They are educated in essential safety and project-management skills, and put under the guidance of a construction manager. In addition, a job site safety review (JSSR) is filled out for each job. L.E. Meyers may be a model for good safety programs that keep management, foremen and linemen on the same page when it comes to safety.

“A big part of your success has to do with training,” Cooper said.

Training in all safety aspects, including grounding procedures, which Cooper cites as the biggest hazard, has given them some comfort with their own foremen. In addition, safety audits include safety supervisors, district managers, regional managers, district vice president, and vice president and manager of safety who visit the job site regularly to oversee the work.

Lee Boulanger, L.E. Meyers manager of safety operations, is responsible for ensuring the work site is as safe as possible. Boulanger points out that experience plays a key role in safety. “There’s a variety of experience out there,” he said. “When there’s a high-line job you can’t send someone out who doesn’t understand what needs to be done.”

But what about the companies that don’t have that degree of safety structure? Larger companies generally have a safety protocol that involves numerous safety representatives as well as safety audits and other forms to be filled out by foremen and project managers. Smaller companies may not have that luxury, and even the large companies can’t have someone on the job site every hour of every day. Ultimately, safety decisions are in the hands of the foreman on the job.

Smaller companies can benefit from the ability of management to make personal appearances at job sites. These kinds of visits are fairly common for many companies and are effective as well. There is no substitute for going to the workplace and seeing for yourself what is happening. Talking to employees frankly can often yield useful information as well. Every company can gain from taking a second look at its safety training program and safety procedures. Keeping a watchful eye over each job and each foreman, as well as polling the linemen can help contractors ensure that their crews are as safe as they can be.

There are signs of improvement throughout the industry as well. For one thing, the number of accidents has leveled. That may be in part due to better equipment and more rigorous training as well as OSHA standards. In addition, the attitudes of workers themselves may be changing. While they may have a reputation for being “tough guys” who aren’t afraid of “taking risks,” workers recently out of school are better educated in the value of following safety procedures.

In California, contractors are taking advantage of a foreman safety training course. However, not many linemen and foremen have the incentive to take the class. Armando Mendez, director of apprentice training for California/Nevada JATC, said they established a construction foreman safety-training course that was initially mandatory and involved the basics of pole climbing, equipment operation, working with primary voltage, and both overhead and underground safety. Since the program began in January 2003, about 450 linemen have attended. However, numbers have dwindled since the program became voluntary, partly because of lack of IBEW support for a mandatory program and because most contractors do not pay linemen to attend. In May, Mendez said, only two people turned out for the course.

The 16-hour course offers training for linemen for two years of work, involving safety, responsibility of foremen, tool and equipment management and legal issues. The second portion of the course involves estimating and project management.

“We try to run it with 21 people, sometimes it is larger and sometimes smaller,” Mendez said. “It’s supposed to be on the journeyman’s own accord.

“In our business, one minute you’re a lineman, the next minute you’re a foreman. It’s like, ‘Here’s the pickup and the keys,’” Mendez said, noting that often those selections are not based on seniority and those with no basic training are at a disadvantage. “I’m hoping contractors will encourage their foremen to attend. It’s a big behavioral change for journeymen.”

According to Leo Jordan, director of safety for Pouk & Steinle in Riverside, Calif., most of his foremen have taken the safety training course. But one problem contractors face is the turnover of foremen and linemen and the quick appointment of foremen who may or may not have significant training.

With each new job, review of what needs to be done and what equipment will be used takes place between management and foremen, before they then go to the linemen. Talking with the general foreman also helps give the contractor perspective on what is happening on the job site, but it’s not always a guaranteed source of information, either. Sometimes selection of a line foreman is a matter of “eenie meenie minie moe,” Jordan pointed out, and not all linemen are enthusiastic about being selected.

“It’s more paperwork, more responsibility and not that much more money,” Jordan said. “The solution is constantly talking with the foreman on down. Getting them to recognize the importance of safety and to say something when they see something wrong.”

Jordan added that many younger workers are raised in a more regulated environment. In addition, OSHA regulations and customer demand are forcing a close look at safety by contractors as well as the foremen and linemen themselves.

“There are a lot of factors to make you want to do better,” Jordan said. “The hazards have always been there. You can never stop thinking because the hazards can kill you.”

Michael Gilchrist, Northeastern Line Constructors Chapter manager, pointed out that “obviously in human nature some people are better than others…it’s to a contractor’s benefit to keep an eye out.” Gilchrist emphasized the importance of tailgate safety talks, in which the foreman lays out the details of the job with the crew.

At the Southeastern Line Constructors Chapter, similar issues take place. Manager Steve Gaines Jr. points out that linemen always work “in imminent threat of physical injury.” Once a lineman gets used to that threat, it is not a great stretch to imagine a sense of machismo that leads to inconsistent safety practices.

In many cases, Gaines said, it’s a matter of new blood coming from apprenticeship training replacing the more cavalier practices of the old school. In the meantime, the more experienced linemen are not likely to accept safety-related feedback from their junior crew members well.

The Southeastern Line Constructors Apprentice Training (SELCAT) has joined forces with NECA, IBEW Districts 5 and 10, and OSHA to seek training improvements and journeymen oversight. Implemented in September 2003, the alliance involves quarterly meetings with members to talk about training programs, meetings they have attended and related safety-training issues.

Gaines, who has spoken to each SELCAT class for the past four years, said some companies have excellent safety oversight, while others might not be as rigorous.

“Some companies are very much in touch,” he said. “They monitor all the projects and emphasize the tailgate safety sessions.”

For those who struggle to maintain safety consistency, the solution may not be simple, but inclusion of better training, management oversight and employment of younger, safety-conscious linemen will help take them in the right direction.