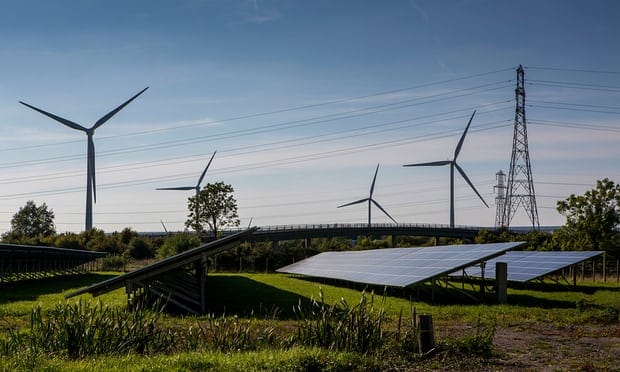 Britain’s greenhouse gas emissions also continued to fall, dropping 3% in 2017, as coal use fell and the use of renewables climbed.

Energy experienced the biggest drop in emissions of any UK sector, of 8%, while pollution from transport and businesses stayed flat.

Energy industry chiefs said the figures showed that the government should rethink its ban on onshore wind subsidies, a move that ministers have hinted could happen soon.

Lawrence Slade, chief executive of the big six lobby group Energy UK, said: “We need to keep up the pace ... by ensuring that the lowest cost renewables are no longer excluded from the market.”

But in the fourth quarter of 2017, high wind speeds, new renewables installations and lower nuclear output saw wind and solar becoming the second biggest source of power for the first time.

Wind and solar generated 18.33 terawatt hours (TWh), with nuclear on 16.69TWh, the figures published by the Department for Business, Energy and Industrial Strategy show.

But renewables still have a long way to go to catch up with gas, the UK’s top source of electricity at 36.12TWh, which saw its share of generation fall slightly.

Greenpeace said the figures showed the government should capitalise on its lead in renewables and “stop wasting time and money propping up nuclear power”.

Horizon Nuclear Power, a subsidiary of the Japanese conglomerate Hitachi, is in talks with Whitehall officials for a financial support package from the government, which it says it needs by midsummer.

By contrast, large-scale solar and onshore wind projects are not eligible for support, after the Conservative government cut subsidies in 2015.

However the energy minister, Claire Perry, recently told House Magazine that “we will have another auction that brings forward wind and solar, we just haven’t yet said when”.