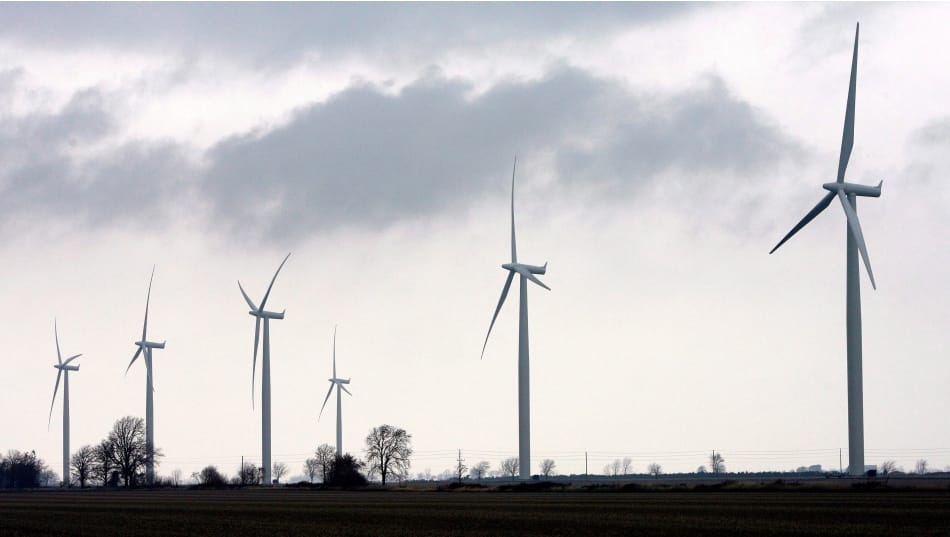 Wind turbines are shown at the opening of a 44-turbine wind farm near Port Alma, Ontario

TORONTO - Cancelling an eastern Ontario green energy project that has been under development for nearly a decade could cost more than $100 million, the president of the company said Wednesday, warning that the dispute could be headed to the courts.

Ontario's governing Progressive Conservatives said this week that one of their first priorities during the legislature's summer sitting would be to cancel the contract for the White Pines Project in Prince Edward County.

Ian MacRae, president of WPD Canada, the company behind the project, said he was stunned by the news given that the project is weeks away from completion.

"What our lawyers are telling us is we have a completely valid contract that we've had since 2009 with the (Independent Electricity System Operator). ... There's no good reason for the government to breach that contract," he said.

The government has also not reached out to discuss the cancellation, he said. Meanwhile, construction on the site is in full swing, he said.

"Over the last couple weeks we've had an average of 100 people on site every day," he said. "The footprint of the project is 100 per cent in. So, all the access roads, the concrete for the base foundations, much of the electrical infrastructure. The sub-station is nearing completion."

The project includes nine wind turbines meant to produce enough electricity to power just over 3,000 homes annually. All of the turbines are expected to be installed over the next three weeks, with testing scheduled for the following month.

MacRae couldn't say for certain who would have to pay for the cancellation, electricity ratepayers or taxpayers.

"Somehow that money would come from IESO and it would be my assumption that would end up somehow on the ratepayers," he said. "We just need to see what the government has in mind and who will foot the bill."

Progressive Conservative house leader Todd Smith, who represents the riding where the project is being built, said the legislation to cancel the project will also insulate taxpayers from domestic litigation over the dismantling of green energy projects.

"This is something that the people of Prince Edward County have been fighting ... for seven years," he said. "This shouldn't have come as a surprise to anybody that this was at the top of the agenda for the incoming government."

Smith questioned why Ontario's Independent Electricity System Operator gave the final approval for the project during the spring election campaign.

"There's a lot of questions about how this ever got greenlighted in the first place," he said. "This project was granted its notice to proceed two days into the election campaign ... when (the IESO) should have been in the caretaker mode."

Terry Young, the IESO's vice president of policy, engagement and innovation, said the agency could not comment because of the pending introduction of legislation to cancel the deal.

NDP Leader Andrea Horwath said the new Tory government is behaving like the previous Liberal government by cancelling energy projects and tearing up contracts. She likened the Tory plan to the Liberal gas plant scandal that saw the government relocate two plants at a substantial cost to taxpayers.