PC Leader Doug Ford vows to fire Hydro One CEO, board if elected 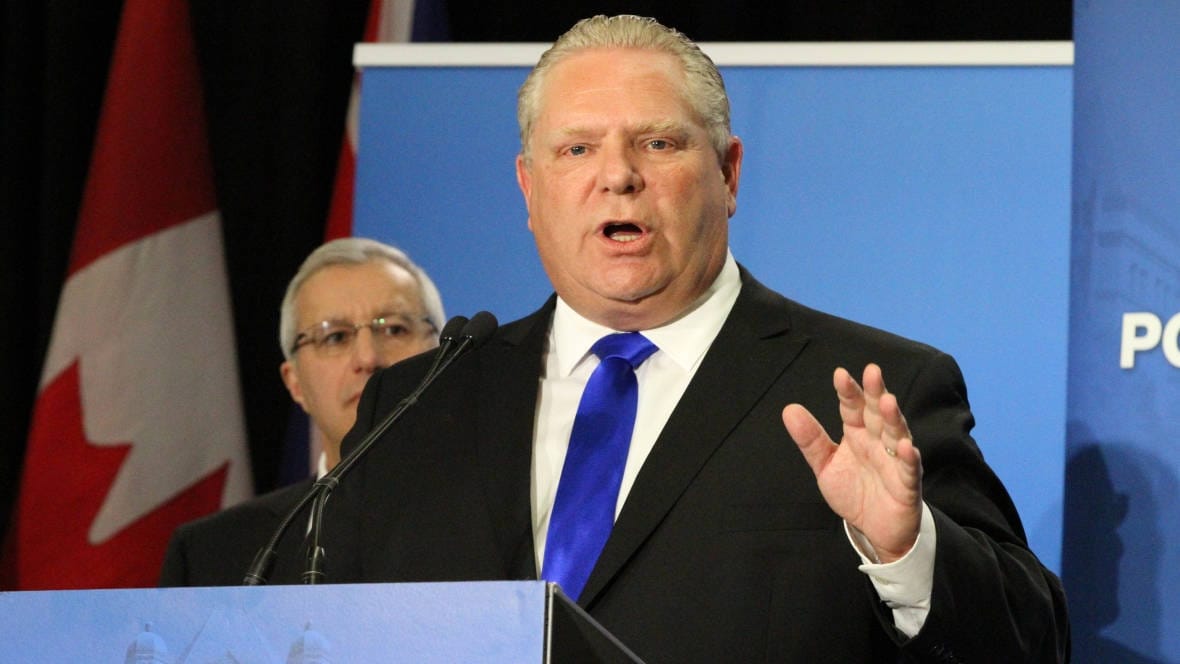 Ontario PC Leader Doug Ford is vowing to fire the head of Hydro One, and its entire board if he's elected premier in June.

Ford made the announcement, calling President and CEO Mayo Schmidt, Premier "Kathleen Wynne's $6-Million dollar man," referring to his yearly salary and bonuses, which now add up to $6.2 million.

"This board and this CEO are laughing themselves to the bank," Ford said.

However, it's unclear how Ford would do that since the province does not control the company anymore.

"We don't have the ability to go out and say we are firing the CEO at Hydro One," PC energy critic Todd Smith said while speaking to reporters after Ford's remarks.

However, he said "we do have tools at our disposal in the tool box. The unfortunate thing is that Kathleen Wynne and the Liberals have just let those tools sit there for the last couple of years and [have] not taken action on things like this."

Smith declined to provide details about what those tools are, but suggested Ford would have the right to fire Hydro's board.

He said that would send a message "that we're not going to accept these salaries."

Smith says the Ontario gov still has the right to fire Hydro One board. What about their contracts? Pay them out? Smith says they don't know the details of people's contacts

We will not engage in politics,' Hydro One says

A Hydro One spokesperson said the amount customers pay to compensate the CEO's salary is the same as before privatization — two cents on each monthly bill.

"We will not engage in politics, however our customers deserve the facts," said the email statement to CBC Toronto.

"Nearly 80 per cent of the total executive compensation package is paid for by shareholders."

Peter Tabuns, the NDP's energy critic, said his government would aim to retake public control of Hydro One to control the CEO's "outrageous salary."

But while he shares Ford's goal of cutting Schmidt's pay, Tabuns blasted what he believes would be the PC leader's approach.

"Doug Ford has no idea how to reign [sic] in the soaring hydro bills that Ontario families are facing — in fact, if his threats of further privatization include hydro, he'll drive bills and executive salaries ever higher," he said in an email statement.

The only plan we've heard from Doug Ford so far is firing people and laying off people.- Glenn Thibeault, Energy Minister

​Tabuns says his party would aim to cut hydro bills by 30 per cent.

Meanwhile, Liberal Energy Minister Glenn Thibeault said Ford's plan will do nothing to address the actual issue of keeping hydro rates low, comparing his statement Thursday to the rhetoric and actions of U.S. President Donald Trump.

"The only plan we've heard from Doug Ford so far is firing people and laying off people," Thibeault said.

"What I'm seeing a very strong prevalence to is the person running the White House. He's been doing a lot of firing as well and that's not been working out so well for them."

Hydro prices have shot up in recent years prompting criticism from across Ontario. Wynne made the controversial move of privatizing part of the utility beginning in 2015.

By Oct. 2017, the Ontario Liberal government's "Fair Hydro Plan" had brought down the average household electricity bill by 25 per cent from the peak it hit in the summer of 2016. The Wynne government has also committed to keep rate increases below inflation for the next four years, but admits bills will rise significantly in the decade that follows.

Ford blasted the government's moves during a Toronto news conference.

"The party's over with the tax payer's money, we're going to start respecting the tax payers," Ford said, repeatedly saying the money spent on Hydro One salaries is "morally indefensible."