GENEVA - It sounds like the stuff of dreams: a virtually limitless source of energy that doesn’t produce greenhouse gases or radioactive waste. That’s the promise of nuclear fusion, which for decades has been nothing more than a fantasy due to insurmountable technical challenges. But things are heating up in what has turned into a race to create what amounts to an artificial sun here on Earth, one that can provide power for our kettles, cars and light bulbs.

Today’s nuclear power plants create electricity through nuclear fission, in which atoms are split. Nuclear fusion however, involves combining atomic nuclei to release energy. It’s the same reaction that’s taking place at the Sun’s core. But overcoming the natural repulsion between atomic nuclei and maintaining the right conditions for fusion to occur isn’t straightforward. And doing so in a way that produces more energy than the reaction consumes has been beyond the grasp of the finest minds in physics for decades.

But perhaps not for much longer. Some major technical challenges have been overcome in the past few years and governments around the world have been pouring money into fusion power research. There are also over 20 private ventures in the UK, US, Europe, China and Australia vying to be the first to make fusion energy production a reality.

“People are saying, ‘If it really is the ultimate solution, let’s find out whether it works or not,’” says Dr Tim Luce, head of science and operation at the International Thermonuclear Experimental Reactor (ITER), being built in southeast France. ITER is the biggest throw of the fusion dice yet.

Its $22bn (£15.9bn) build cost is being met by the governments of two-thirds of the world’s population, including the EU, the US, China and Russia, and when it’s fired up in 2025 it’ll be the world’s largest fusion reactor. If it works, ITER will transform fusion power from being the stuff of dreams into a viable energy source.

Constructing a nuclear fusion reactor
ITER will be a tokamak reactor – thought to be the best hope for fusion power. Inside a tokamak, a gas, often a hydrogen isotope called deuterium, is subjected to intense heat and pressure, forcing electrons out of the atoms. This creates a plasma – a superheated, ionised gas – that has to be contained by intense magnetic fields.

The containment is vital, as no material on Earth could withstand the intense heat (100,000,000°C and above) that the plasma has to reach so that fusion can begin. It’s close to 10 times the heat at the Sun’s core, and temperatures like that are needed in a tokamak because the gravitational pressure within the Sun can’t be recreated.

When atomic nuclei do start to fuse, vast amounts of energy are released. While the experimental reactors currently in operation release that energy as heat, in a fusion reactor power plant, the heat would be used to produce steam that would drive turbines to generate electricity.

Tokamaks aren’t the only fusion reactors being tried. Another type of reactor uses lasers to heat and compress a hydrogen fuel to initiate fusion. In August 2021, one such device at the National Ignition Facility, at the Lawrence Livermore National Laboratory in California, generated 1.35 megajoules of energy. This record-breaking figure brings fusion power a step closer to net energy gain, but most hopes are still pinned on tokamak reactors rather than lasers.

In June 2021, China’s Experimental Advanced Superconducting Tokamak (EAST) reactor maintained a plasma for 101 seconds at 120,000,000°C. Before that, the record was 20 seconds. Ultimately, a fusion reactor would need to sustain the plasma indefinitely – or at least for eight-hour ‘pulses’ during periods of peak electricity demand.

A real game-changer for tokamaks has been the magnets used to produce the magnetic field. “We know how to make magnets that generate a very high magnetic field from copper or other kinds of metal, but you would pay a fortune for the electricity. It wouldn’t be a net energy gain from the plant,” says Luce. 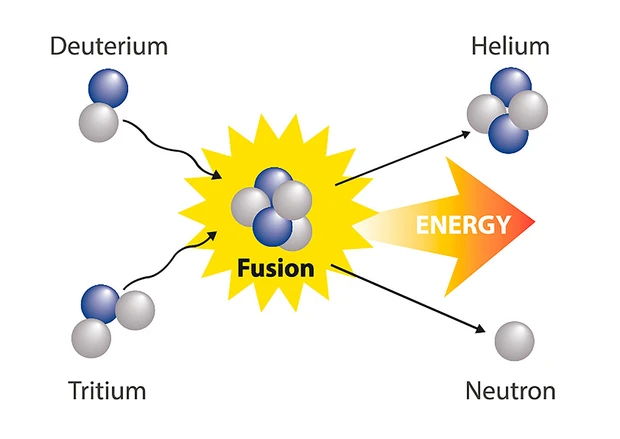 One route for nuclear fusion is to use atoms of deuterium and tritium, both isotopes of hydrogen. They fuse under incredible heat and pressure, and the resulting products release energy as heat

The solution is to use high-temperature, superconducting magnets made from superconducting wire, or ‘tape’, that has no electrical resistance. These magnets can create intense magnetic fields and don’t lose energy as heat.

“High temperature superconductivity has been known about for 35 years. But the manufacturing capability to make tape in the lengths that would be required to make a reasonable fusion coil has just recently been developed,” says Luce. One of ITER’s magnets, the central solenoid, will produce a field of 13 tesla – 280,000 times Earth’s magnetic field.

The inner walls of ITER’s vacuum vessel, where the fusion will occur, will be lined with beryllium, a metal that won’t contaminate the plasma much if they touch. At the bottom is the divertor that will keep the temperature inside the reactor under control.

“The heat load on the divertor can be as large as in a rocket nozzle,” says Luce. “Rocket nozzles work because you can get into orbit within minutes and in space it’s really cold.” In a fusion reactor, a divertor would need to withstand this heat indefinitely and at ITER they’ll be testing one made out of tungsten.

Meanwhile, in the US, the National Spherical Torus Experiment – Upgrade (NSTX-U) fusion reactor will be fired up in the autumn of 2022. One of its priorities will be to see whether lining the reactor with lithium helps to keep the plasma stable.

Choosing a fuel
Instead of just using deuterium as the fusion fuel, ITER will use deuterium mixed with tritium, another hydrogen isotope. The deuterium-tritium blend offers the best chance of getting significantly more power out than is put in. Proponents of fusion power say one reason the technology is safe is that the fuel needs to be constantly fed into the reactor to keep fusion happening, making a runaway reaction impossible.

Deuterium can be extracted from seawater, so there’s a virtually limitless supply of it. But only 20kg of tritium are thought to exist worldwide, so fusion power plants will have to produce it (ITER will develop technology to ‘breed’ tritium). While some radioactive waste will be produced in a fusion plant, it’ll have a lifetime of around 100 years, rather than the thousands of years from fission.

At the time of writing in September, researchers at the Joint European Torus (JET) fusion reactor in Oxfordshire were due to start their deuterium-tritium fusion reactions. “JET will help ITER prepare a choice of machine parameters to optimise the fusion power,” says Dr Joelle Mailloux, one of the scientific programme leaders at JET. These parameters will include finding the best combination of deuterium and tritium, and establishing how the current is increased in the magnets before fusion starts.

The groundwork laid down at JET should accelerate ITER’s efforts to accomplish net energy gain. ITER will produce ‘first plasma’ in December 2025 and be cranked up to full power over the following decade. Its plasma temperature will reach 150,000,000°C and its target is to produce 500 megawatts of fusion power for every 50 megawatts of input heating power.