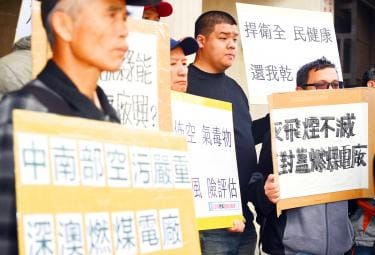 FIRED UP: The legislature’s Health, Environment and Labor Committee met to review the project, amid protest outside

The controversy over the Shenao Power Plant heated up yesterday as Environmental Protection Administration (EPA) and New Taipei City Government officials quibbled over the project’s potential impact on a fisheries conservation area and other issues.

State-run Taiwan Power Co (Taipower) wants to build a coal-fired plant on the site of the old Shenao plant, which was near Rueifang District’s (瑞芳) Shenao Harbor.

The controversy reached a new peak after New Taipei City Mayor Eric Chu on Tuesday last week posted on Facebook that construction of wave breakers for the project would overlap with a marine conservation area that was established in November 2014.

The EPA and Taipower chose to ignore the demarcation lines of the conservation area, Chu wrote.

Dozens of residents from Rueifang and other New Taipei City districts yesterday launched a protest at 9am in front of the Legislative Yuan in Taipei, where the Health, Environment and Labor Committee was scheduled to review government reports on the project.

More than 400 Rueifang residents have signed a petition against the project, including 17 of the district’s 34 borough wardens, Anti-Shenao Plant Self-Help Group director Chen Chih-chiang said.

Ruifang residents have limited access to information, and many only became aware of the construction project after the EPA’s March 14 decision attracted widespread media coverage, Chen said,

Most residents do not support the project, despite Taipower’s claims to the contrary, Chen said.

New Power Party Executive Chairman Huang Kuo-chang, who represents Rueifang and adjacent districts, said the EPA has shown an “arrogance of power” by neglecting the potential impact on public health and the local ecology of a new coal-fired power plant.

If the New Taipei City Government was really concerned about the marine conservation area, it should have spoken up at earlier EIA meetings, rather than criticizing the EIA decision after it was passed, Environmental Protection Administration Deputy Minister Chan Shun-kuei told lawmakers at yesterday’s meeting.

Chan said he wondered if Chu was using the Shenao project for political gain.

However, New Taipei City Environmental Protection Department specialist Sun Chung-wei  told lawmakers that the Fisheries Agency and other experts voiced concerns about the conservation area during the first EIA committee meeting on the proposed changes to the Shenao project on June 15 last year.

While the New Taipei City Fisheries and Fishing Port Affairs Management Office did not present a “new” opinion during later EIA committee meetings, that did not mean it agreed to the project, Sun said.

However, Chan said that Sun was using a fallacious argument and trying to evade responsibility, as the conservation area had been demarcated by the city government.