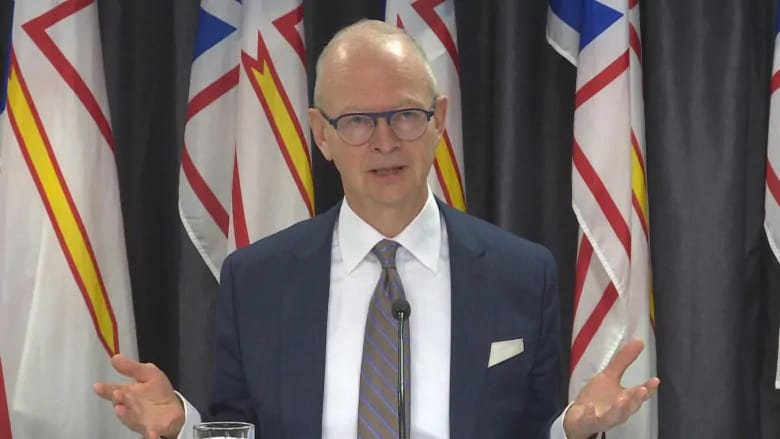 According to Crosbie, who presented the party's Crosbie Hydro Energy Action Plan — acronym CHEAP — at a press conference Monday, $575.4 million is needed per year in order to keep rates from ballooning past 14.67 cents per kilowatt hour.

Here's where he thinks the money could come from:

The oil money, Crosbie said, isn't going into government coffers but being invested into the offshore which, he said, is a good place for it.

"But the plan from the beginning around Muskrat Falls was that if there was need for it — for mitigation for rates — that those revenues and operating cash flows from Nalcor oil and gas would be available to be recycled into rate mitigation. and that's what we're going to have to do," he said.

According to Crosbie, his numbers come from the preliminary stage of the Public Utilities Board process.

This is a recent aerial view of the Muskrat Falls project in central Labrador. The project is more than 90 per cent complete, with first power forecast for late 2019. (Nalcor)

"I'm telling you this is the best information available to anyone outside of government," he said. "We're working on what we can."

The PUB estimated Nalcor restructuring could save between $10 million and $15 million, according to Crosbie, but he figures there's "enough duplication and overpayment involved in the way things are now set up that we can find $30 million there."

A recent Public Utilities Board Report says there's a potential $10 million to $15 million in savings from Nalcor, but Crosbie says he can find $30 million. (CBC)

"The promise is that Muskrat Falls, when it comes online — comes in service — will not increase your rates. Between now and when that happens there are rate increases already in the pipeline up to that level of [14.67 cents per kilowatt-hour] … so that is the baseline target rate at which rates will be kept.

"In other words, Muskrat will not drive up prices for electricity to consumers beyond that point."

"We think it could be done out of the resources that I've just identified now, but if there's a problem with that, and as a temporary measure, we can use a modest amount of the Atlantic Accord review, fiscal review, revenues," he said.

Premier Dwight Ball slammed the plan at the House of Assembly on Monday, saying it lacked insight.

"It was a copy and paste exercise," he told reporters. "There's nothing new in that plan. Not at all."

"We're not leaving any stone unturned of where the opportunity would be to actually generate revenue," he said.  "We are genuinely concerned about rate mitigation and we've got to get a plan in place."

According to Crosbie, tax exemptions that expired in 2016 allow the province to tax exports from the Upper Churchill, which, he said, could result in "hundreds of millions or billions" in revenue.

"It's not my philosophy to immediately go and do that because that would generate litigation — who needs more of that? — but we do need to let Quebec know that we're very aware of that, and aware of that opportunity, and invite them to come talk about a whole host of issues," Crosbie said.

Crosbie said the tax would also have to be applied to domestic consumption.

"But so massive is the potential revenue from the Upper Churchill export that there would be ways to mitigate that and negate the effect of that on consumers in the province."

Crosbie said with the Atlantic Accord revenue, he could still present a balanced budget by 2022.