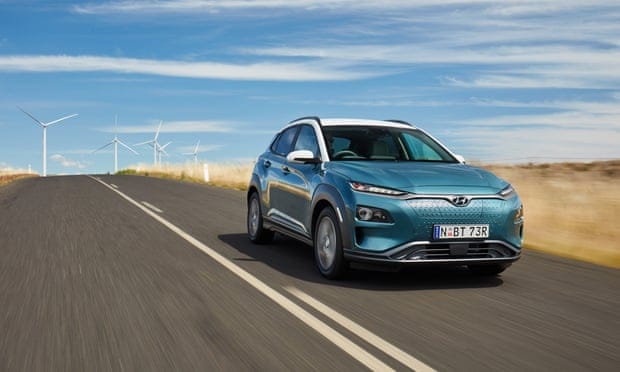 Report finds while 28 electric models are now on sale, including eight below $65,000, market share is still only 0.6% of new car sales

MELBOURNE - Sales of electric vehicles in Australia tripled in 2019 despite a lack of government support, according to the industry’s peak body.

The country’s network of electric vehicle charging stations was also growing, the Electric Vehicle Council’s annual report found, including a rise in the number of faster charging stations that let drivers recharge a car in about 15 minutes.

But the report, released on Wednesday, found the market share for electric vehicles was still only 0.6% of new vehicle sales – well behind the 2.5% to 5% in other developed countries.

The chief executive of the council, Behyad Jafari, said the rise in sales was down to more models becoming available. There are now 28 electric models on sale, with eight priced below $65,000.

Six more were due to arrive before the end of 2021, including two priced below $50,000, the council’s report said.

“We have repeatedly heard from car companies that they were planning to bring vehicles here, but Australia doesn’t have that policy support.”

The Morrison government promised a national electric vehicle strategy would be finalised by the middle of this year, but the policy has been delayed. The prime minister, Scott Morrison, last year accused Labor of wanting to “end the weekend” and force people out of four-wheel drives after the opposition set a target of 50% of new car sales being electric by 2030.

Jafari cited the Kia e-Niro – an award-winning electric SUV that was being prepared for an Australian launch, but is now reportedly on hold because the manufacturer favoured shipping to countries with emissions standards.

The council’s members include BMW, Nissan, Hyundai and Harley Davidson, as well as energy, technology and charging infrastructure companies.

There have been 3,226 electric vehicles sold in 2020, the report said, despite an overall drop of 20% in vehicle sales due to the Covid-19 pandemic.

Jafari said: “Our report is showing that Australian consumers want these cars.

“There is no controversy that the future of the industry is electric, but at the moment the industry is looking at different markets. We want policies that show [Australia] is going on this journey.”

Government agency data has forecast that half the new cars sold will be electric by 2035 even if there is no policy to support their uptake.

Jafari said most G20 countries had emissions standards in place for vehicles sold and incentives in place to support electric vehicles, such as rebates or exemptions from charges. This hadn’t happened in Australia, he said.

The report said: “Globally, carmakers are rolling out more electric vehicle models, but so far production cannot keep up with demand. This means that without policy signals, Australians will continue to be denied access to the full global range of electric vehicles.”

On Tuesday, one Australian charging provider, Evie Networks, opened an ultra-fast station at a rest stop at Campbell Town in Tasmania – between Launceston and Hobart.

The company said the station would connect EV owners in the state’s north and south and the two 350kW chargers could recharge a vehicle in 15 minutes. Two more sites were planned for Tasmania, the company said.

A Tasmanian government grant to support electric vehicle charging had helped finance the site. Evie was also supported with a $15m grant from the federal government’s Australian Renewable Energy Agency.

According to the council report, Australia now has 2,307 public charging stations, including 357 fast chargers – a rise of 40% in the past year.

A survey of 2,900 people in New South Wales, the ACT, Victoria and South Australia, carried out by NRMA, RACV and RAA on behalf of the council, found the main barriers to buying an electric vehicle were concerns over access to charging points, cost and uncertainty over driving range.

The report said the average battery range of electric vehicles available in Australia was 400km, but almost 80% of people thought the average was less.

According to the survey, 56% of Australians would consider an electric car when they next bought a vehicle.

“We are far behind, but it is surmountable,” Jafari said.

The council report also rated state and territories on the policies that supported its industry and found the ACT was leading, followed by NSW and Queensland.

A review of commercial electric vehicle use found public electric bus trials were planned or under way in Queensland, NSW, WA, Victoria and ACT. There are now more than 400,000 electric buses in use around the globe.