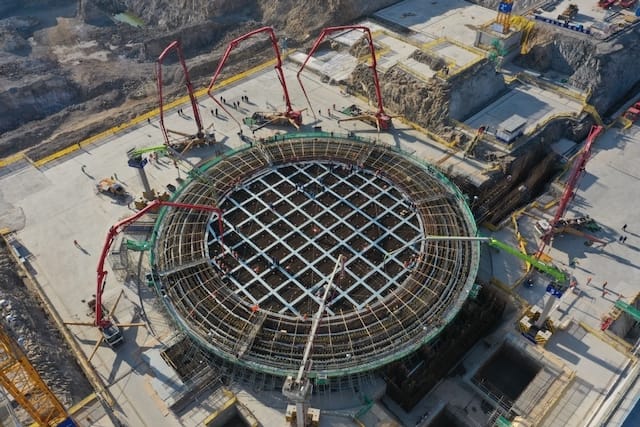 BEIJING - While China has failed to accomplish its 2020 nuclear target of 58 gigawatts under operation and 30 GW under construction, insiders are optimistic about prospects for the nonpolluting energy resource in China over the next five years as the country has stepped up nuclear approvals and construction since 2020.

China expects to record 49 operating nuclear facilities and capacity of more than 51 GW as of the end of 2020. Nuclear power currently makes up around 2.4 percent of the country's total installed energy capacity, said the China Nuclear Energy Association. There are 19 facilities that have received approval and are under construction, with capacity exceeding 20 GW, ranking top globally, it said.

"With surging power demand from coastal regions, more domestic technology will be adopted with installations likely nearing 100 GW by the end of 2030," said Wei Hanyang, a power market analyst at Bloomberg New Energy.

Following the Fukushima nuclear reactor disaster in 2011 in Japan, China has, like many countries including Japan, Germany and Switzerland, suspended nuclear power project approvals for a period, including construction of the pilot project of Shidaowan nuclear power plant in Shandong province that uses CAP1400 technology, based on third-generation Westinghouse AP1000 reactor technology.

As China promotes greener development and prioritizes safety and security of nuclear power plant construction, it has pledged to hit peak emissions before 2030 and achieve carbon neutrality by 2060, the Shidaowan plant, originally scheduled to launch construction in 2014 and enter service in 2018, is expected to start fuel loading and begin operations this year.

He added that Chinese companies' cost control capabilities and technological advancements are also likely to continue providing domestic companies with advantages, as the cost per kilowatt-hour is very important, especially as solar, wind and other clean energy solutions become even cheaper over the next few years.

The Zhejiang San'ao nuclear power plant saw concrete poured for unit 1 on Dec 31, according to its operator China General Nuclear. It will be the first of six Hualong One pressurized water reactors to be built at the site as well as the first Chinese nuclear power plant project to involve private capital.

The world's first Hualong One reactor at unit 5 of China National Nuclear Corp's Fuqing nuclear plant in Fujian province was connected to the grid in November. With the start of work on San'ao unit 1, China now has further seven Hualong One units under construction, including Fuqing 6, which is scheduled to go online this year.

CNNC is also constructing one unit at Taipingling in Guangdong and two at Zhangzhou in Fujian province. CGN is building two at its Fangchenggang site in Guangxi Zhuang autonomous region. In addition, two Hualong One units are under construction at Karachi in Pakistan, while CGN proposes to use a UK version of the Hualong One at Bradwell in the United Kingdom.