Can the Electricity Industry Seize Its Resilience Moment? 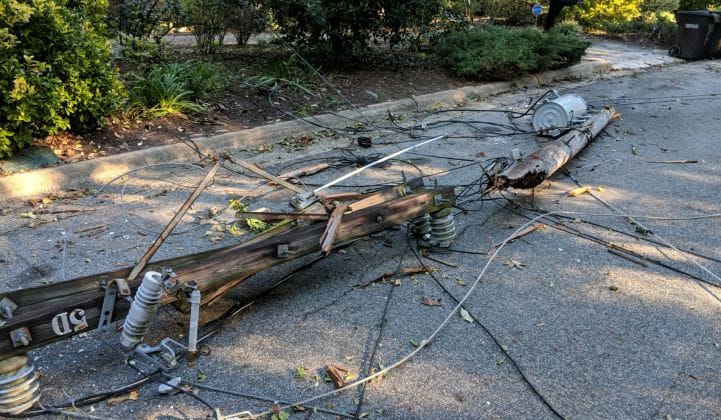 The grid isn't broken, but it needs to be hardened. How best to do it?

WASHINGTON - When operators of Duke Energy's control room in Raleigh, North Carolina wait for a hurricane, the mood is often calm in the hours leading up to the storm.

“Things are usually fairly quiet before the activity starts,” said Mark Goettsch, the systems operations manager at Duke. “We’re anxiously awaiting the first operation and the first event. Once that begins, you get into storm mode.”

Then begins a “frenzied pace” that can last for days — like when Hurricane Florence parked over Duke’s service territory in September.

When an event like Florence hits, all eyes are on transmission and distribution. Where it’s available, Duke uses remote switching to reconnect customers quickly. As outages mount, the utility forecasts and balances its generation with electricity demand.

The control center’s four to six operators work 12-hour shifts, while nearby staff members field thousands of calls and alarms on the system. After it’s over, “we still hold our breath a little bit to make sure we’ve operated everything correctly,” said Goettsch. Damage assessment and rebuilding can only begin once a storm passes.

That cycle is becoming increasingly common in utility service areas like Duke's.

A slate of natural disasters that reads like a roll call — Willa, Michael, Harvey, Irma, Maria, Florence and Thomas — has forced a serious conversation about resiliency. And though Goettsch has heard a lot about resiliency as a “hot topic” at industry events and meetings, those conversations are only now entering Duke’s control room.

Resilience discussions come and go in the energy industry. Storms like Hurricane Sandy and Matthew can spur a nationwide focus on resiliency, but change is largely concentrated in local areas that experienced the disaster. After a few news cycles, the topic fades into the background.

However, experts agree that resilience is becoming much more important to year-round utility planning and operations. It's not a fad.

“If you look at the whole ecosystem of utilities and vendors, there’s a sense that there needs to be a more resilient grid,” said Miki Deric, Accenture’s managing director of utilities, transmission and distribution for North America. “Even if they don’t necessarily agree on everything, they are all working with the same objective.”

Can renewables meet the challenge?

After Hurricane Florence, The Intercept reported on coal ash basins washed out by the storm’s overwhelming waters. In advance of that storm, Duke shut down one nuclear plant to protect it from high winds. The Washington Post also recently reported on a slowly leaking oil spill, which could surpass Deepwater Horizon in size, caused by Hurricane Ivan in 2004.

Clean energy boosters have seized on those vulnerabilities.They say solar and wind, which don’t rely on access to fuel and can often generate power immediately after a storm, provide resilience that other electricity sources do not.

“Clearly, logistics becomes a big issue on fossil plants, much more than renewable,” said Bruce Levy, CEO and president at BMR Energy, which owns and operates clean energy projects in the Caribbean and Latin America. “The ancillaries around it — the fuel delivery, fuel storage, water in, water out — are all as susceptible to damage as a renewable plant.”

Duke, however, dismissed the notion that one generation type could beat out another in a serious storm.

“I don’t think any generation source is immune,” said Duke spokesperson Randy Wheeless. “We’ve always been a big supporter of a balanced energy mix. That’s going to include nuclear and natural gas and solar and renewables as well. We do that because not every day is a good day for each generation source.”

In regard to performance, Wade Schauer, director of Americas Power & Renewables Research at Wood Mackenzie, said the situation is “complex.” According to him, output of solar and wind during a storm depends heavily on the event and its location.

While comprehensive data on generation performance is sparse, Schauer said coal and gas generators could experience outages at 25 percent while stormy weather might cut 95 percent of output from renewables. Ahead of last year’s “bomb cyclone” in New England, WoodMac data shows that wind dropped to less than 1 percent of the supply mix.

“When it comes to resiliency, ‘average performance’ doesn't cut it,” said Schauer.

In the future, he said high winds could impact all U.S. offshore wind farms, since projects are slated for a small geographic area in the Northeast. He also pointed to anecdotal instances of solar arrays in New England taken out by feet of snow. During Florence, North Carolina’s wind farms escaped the highest winds and continued producing electricity throughout. Cloud cover, on the other hand, pushed solar production below average levels.

After Florence passed, Duke reported that most of its solar came online quickly, although four of its utility-owned facilities remained offline for weeks afterward. Only one was because of damage; the other three remained offline due to substation interconnection issues.

“Solar performed pretty well,” said Wheeless. “But did it come out unscathed? No.”

Rocky Mountain Institute (RMI) also assembled a guide for retrofitting and constructing new installations. It described attributes of solar systems that survived storms, like lateral racking supports, and those that failed, like undersized and under-torqued bolts.

“The hurricanes, as much as no one liked them, [were] a real learning experience for folks in our industry,” said BMR’s Levy. “We saw what worked, and what didn’t.”

Facing the "800-pound gorilla" on the grid

“I'd be surprised if a single customer power outage was due to generators being offline, especially since loads where so low due to mild temperatures and people leaving the area ahead of the storm,” he said of Hurricane Florence. “Instead, it was wind [and] tree damage to power lines and blown transformers.”