California Wants Cars to Run on Electricity. It’s Going to Need a Much Bigger Grid 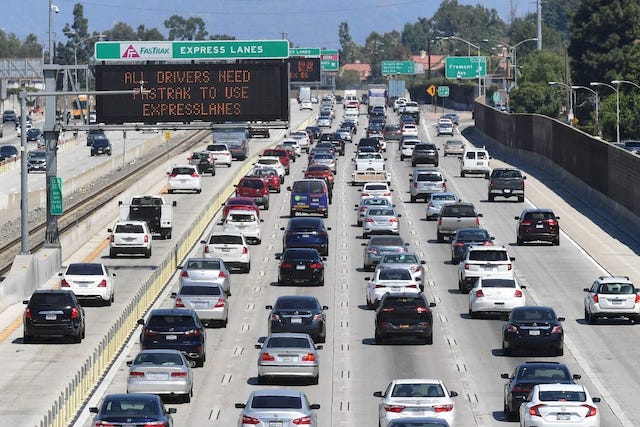 Going all electric in 15 years will dramatically increase electricity demand.

SAN FRANCISCO - Leaning on the hood of a shiny red electric Ford Mustang, California Gov. Gavin Newsom signed an executive order Wednesday to end the sale of new gas-burning cars in his state in 15 years.

Energy consultants and academics say converting all passenger cars and trucks to run on electricity in California could raise power demand by as much as 25%. That poses a major challenge for a state already facing periodic rolling blackouts as it rapidly transitions to renewable energy.

California will need to boost power generation, scale up its network of fast charging stations, enhance its electric grid to handle the added load and hope that battery technology continues to improve enough that millions in America’s most populous state can handle long freeway commutes to schools and offices without problems.

“We’ve got 15 years to do the work,” said Pedro Pizarro, chief executive of Edison International, owner of Southern California Edison, a utility serving 15 million people in the state. “Frankly the state agencies are going to have to do their part. We’ve got to get to the permitting processes, the approvals; all of that work is going to have to get accelerated to meet [Wednesday’s] target.”

Switching from petroleum fuels to electricity to phase out the internal combustion engine won’t happen all at once—Mr. Newsom’s order applies to sales of new vehicles, so older gas-powered cars will be on the road in California for many years to come. But the mandate means the state will face a growing demand for megawatts.

California is already facing a shortfall of power supplies over the next couple of years. The problem was highlighted last month when a heat wave blanketed the western U.S. and the state’s grid operator instituted rolling blackouts on two occasions.

“It is too early to tell what kind of impact the order will have on our power grid, and we don’t have any specific analysis or projections,” said Anne Gonzalez, a spokeswoman for the California Independent System Operator, which runs the grid.

Currently, California faces a crunchtime in the early evening as solar power falls off and demand to power air conditioners remains relatively high. Car charging presents a new potential issue: What happens when too many drivers want a high-energy, fast charge at the same time?

Caroline Winn, the chief executive of San Diego Gas & Electric, a utility owned by Sempra Energy that serves 3.6 million people, said there will need to be rules and rates that encourage people to charge their cars at certain times of the day. The utility’s region consistently has excess energy during the middle of the day, she said. If consumers were incentivized to charge then, or overnight, it would reduce the costs of reaching the goal.

“We need to get the rules right and the markets right in order to resolve this issue because certainly California is moving that way,” she said.

The grid will need to be upgraded to prepare for millions of new electric vehicles. The majority of people who own them usually charge them at home, which would mean changes to substations and distribution circuits to accommodate multiple homes in a neighborhood drawing power to fill up batteries. The state’s three main investor-owned utilities are spending billions of dollars to harden the grid to prevent power equipment from sparking catastrophic wildfires.

Mr. Nelder believes the investment will be worth it, because internal combustion engines generate so much waste heat and emissions of uncombusted hydrocarbons that escape out of tailpipes. Improving energy efficiency by upgrading the electrical system could result in lower bills for customers. “We will eliminate a vast amount of waste from the energy system and make it way more efficient,” he said.

Some see the growth of electric vehicles as an opportunity more than a challenge. In the afternoon, when electricity demand is high but the sun is setting and solar power drops off quickly, batteries in passenger cars, buses and other vehicles could release power back into the electric grid to help stabilize it, said Matt Petersen, chairman of the Transportation Electrification Partnership, a public-private effort in Los Angeles to accelerate the deployment of electric vehicles.

The idea is known as “vehicle-to-grid” and has been discussed in a number of countries expanding EV use, including the U.K. and Denmark.

“We end up with rolling batteries that can discharge power when needed,” Mr. Petersen said, adding, “The more electric vehicles we add to the grid, the more renewable energy we can add to the grid.”

One big hurdle for the widespread deployment of electric cars is driving down the cost of batteries to make the cars more affordable. This week, Tesla Inc. Chief Executive Elon Musk said he expected to have a $25,000 model ready by about 2023.

Shirley Meng, director of the Sustainable Power and Energy Center at the University of California, San Diego, said she believed batteries would continue to provide better performance at a lower cost.

“I am confident the battery technology is ready,” she said. Costs are expected to fall as new kinds of materials and metals can be used in the underlying battery chemistry, dropping prices. “Batteries are good now, and they will be better in the next 10 years.”

John Eichberger, executive director of the Fuels Institute, a nonprofit research group launched by the National Association of Convenience Stores, said he hoped that the California Air Resources Board, which is tasked with developing new rules to implement Mr. Newsom’s order, will slow the timeline if the market and electric build-out is running behind.

“We need to think about these critical infrastructure issues because transportation is not optional,” he said. “How do we develop a system that can guarantee consumers that they can get the energy when they need it?”